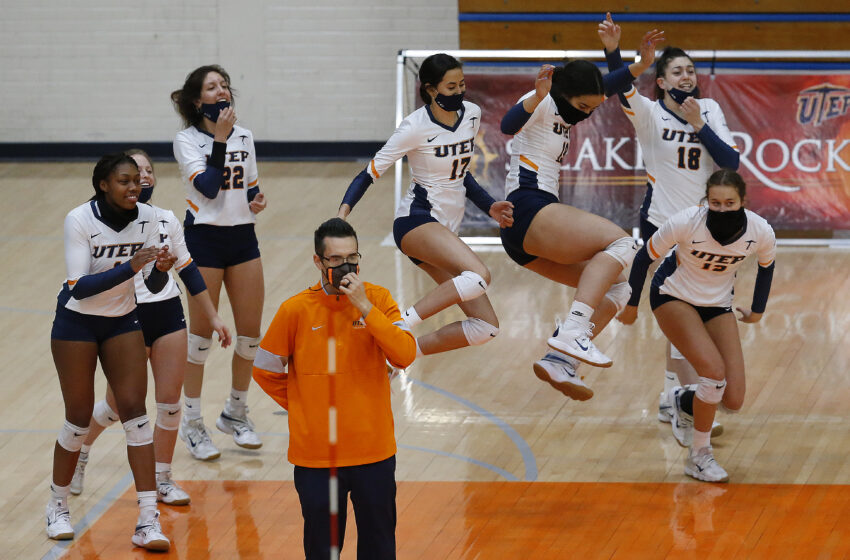 Paulina Perez Rosas addressed her teammates in the post-game huddle.

“We just clinched the third seed (in the C-USA Tournament,” the junior outside hitter said. “But let’s go get the second (seed) tomorrow.”

“We feel pretty good that we’re in (the conference tournament), but we’re not satisfied,” Pérez Rosas said.

For Pérez Rosas and the other outside hitters – freshman Ava Palm, junior Serena Patterson and senior Cheyenne Jones – they would not have recorded their combined .379 hitting percentage if it weren’t for middle blockers redshirt sophomore Kenidy Howard and sophomore Alianza Darley.

Howard and Darley led the Golden Eagles’ middle blockers away from the net to give the outside hitters one-on-one’s and, as a result, 35 of UTEP’s 48 kills.

“That’s why (Palm) and (Pérez Rosas) were better today,” Wallis said. “They were taking one-on-one swings with no middle blocker in sight because (Howard and Darley) did their job appropriately.”

Twelve of the other 13 kills came from swings by Howard and Darley.

Howard had not recorded more than four kills and a hitting percentage of at least .200 since the Miners’ win vs. North Texas March 1. Today, Howard powered home eight kills at a .400 clip.

“(Today) felt refreshing,” Howard said. “These past two weeks have been hard for me. It felt good getting back in the gym and working on the things I need to work on and really going out there and executing. It gave me the confidence that I needed.”

As Howard and Darley led the Golden Eagles’ middles toward the center of the court, setters Kristen Fritsche and Hande Yetis read their movement and set UTEP’s attackers on the pins for those one-on-ones.

“As long as (Darley and I) were jumping big and being up in transition, (Southern Miss’s middle blockers) were going to follow us and that created a huge seam for our pin hitters,” Howard said.

Yetis and Fritsche – who are 10th and 12th in the conference in assists/set – recorded a combined .480 assist percentage with 35 assists on 73 attempts.

Yetis assisted on eight of the Miners’ 16 kills in the first set, five of which both belonged to Jones and Pérez Rosas. Defensively, Darley and Jones assisted on two blocks in the opening frame.

UTEP and Southern Miss were tied, 5-5, in the second set when Jones tallied back-to-back kills to take a two-point advantage and record the 750th kill of her career in her final homestand at Memorial Gym.

After UTEP reached point eight in the set, it never let Southern Miss get closer than three points to its lead.

Palm and Jones hit their best in the final set with eight kills and no errors on 12 swings; they both finished the match with the highest hitting percentages of their careers – .462 and .600, respectively – on a combined 20 kills on 31 attacks.

The Miners added to their conference-best 1.98 aces/set with another four at the service line – two from Fritsche and one apiece from freshmen defensive specialists Savana Trahan and Alyssa Sianez.

Siañez dug out eight balls with 17 total receptions and zero reception errors. Pérez Rosas led the Miners in digs with 10 for her fifth double-double (kills and digs) of the season.

The Golden Eagles’ offensive attack paled in comparison to the Miners’, hitting below .130 in each set and below .100 in the last two frames.

Next up, UTEP volleyball goes for its third season series sweep of a C-USA opponent versus Southern Miss tomorrow at 11 a.m. MT in Memorial Gym.

If the Miners win the match, they move into the second seed of the conference tournament, and if they lose they remain the third seed.