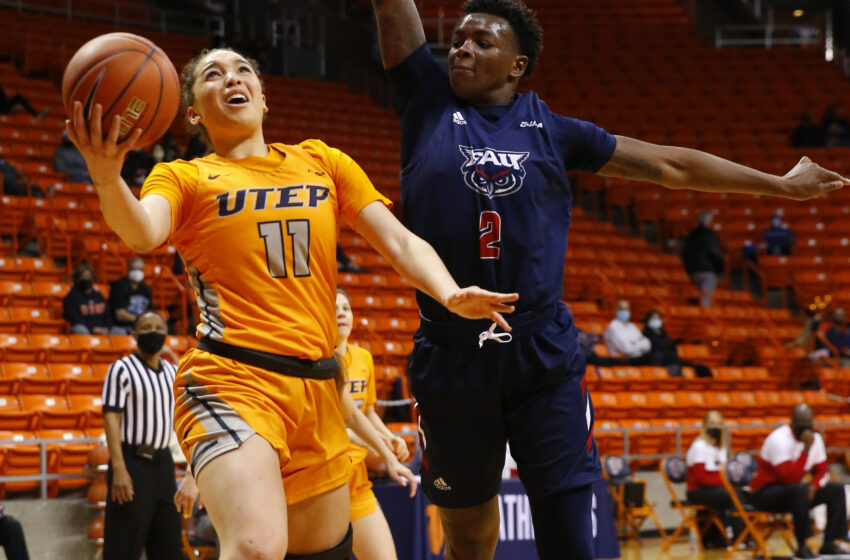 Prior to tipoff, UTEP honored its three seniors in what was their final game at the Don Haskins Center.

Tia Bradshaw, Michelle Pruitt and DejaNae Roebuck have appeared in almost every for the Miners the last two seasons and were successful in ending the 2020-21 home slate on a high note on Monday night.

After falling to the Owls on Sunday, the Miners responded by besting Florida Atlantic in almost every category on the way to a 30-point victory at home.

UTEP entered the half with a three-point lead, but the Miners used a 32-point offensive performance in the third quarter alone to put the game out of reach, while holding FAU to just nine points in the period. The 32 points is the most for the Miners in a quarter this season and the most since scoring 36 in the first quarter against FAU in the opening round of the 2020 C-USA Tournament last March. It was also the third-most points scored in a single quarter in program history.

“I would say it is one of the best quarters we have played defensively and we got offensive payoff because of it,” head coach Kevin Baker said. “I told the girls at halftime that I really loved the way we were defending and I thought that we would wear them down because we were defending so well. We did not play well yesterday and did not show up. Today was more indicative of who we are. Today, we were able to be a little bit more aggressive and put a little bit more pressure on them. We have a young team who is trying to feel their way through Conference USA and I thought we made a statement tonight.”

Four different Miners reached double figures on the night, led by Katia Gallegos who had 19 points (7-10 FG), six rebounds and five assists. Gallegos used a 5-for-6 three-point shooting performance to help lead UTEP to victory, while Roebuck and Isis Lopes each added 15 points on Monday. Destiny Thurman finished the game with 12 points thanks to an 8-0 run she put together right before halftime. Pruitt led the Miners with seven rebounds and added seven points in the victory over FAU.

Iggy Allen led the Owls with 15 points to go along with four rebounds, while Astou Gaye and Alexa Zaph each had 13 points on the night.

Next up, UTEP will hit the road for its final regular-season series at Charlotte on Feb. 26-27. Tipoff for both games is set for 1 p.m. MT.

Both games between UTEP and Charlotte will be streamed on YouTube for free, while fans can also tune in to the radio broadcast with Tim Hagerty calling all the action on the UTEP Miners app. Saturday’s contest can also be heard on ESPN 600 El Paso.