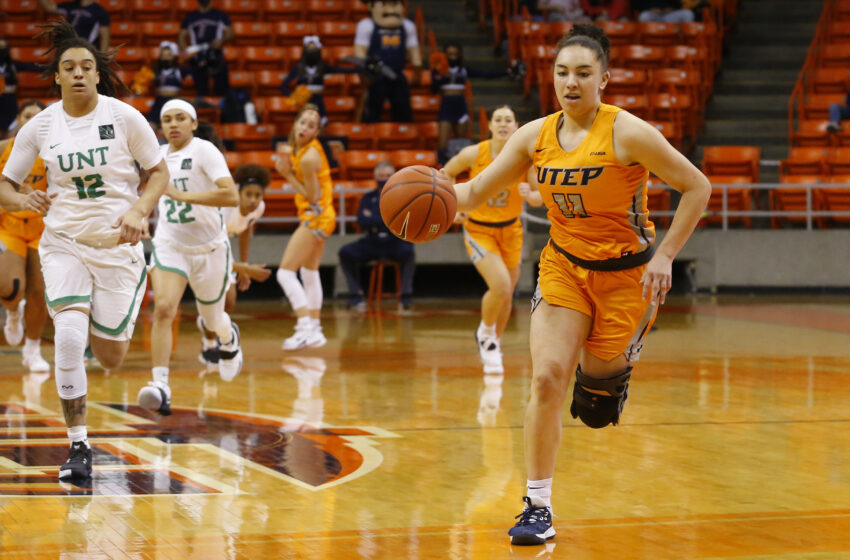 The Miners were led by a pair of sophomores as Katia Gallegos led all scorers with 21 points and Isis Lopes added a season-high 16 points to lead UTEP to a crucial victory in C-USA play.

“We hit timely shots today,” head coach Kevin Baker said. “Down the stretch against Rice and in yesterday’s game, we just didn’t hit the timely shots that we needed to. Today, we hit timely shots. We had a bunch of kids come through and make some big shots in the fourth quarter when we really needed them. I’m so proud of them for that because they played such great defense again today. After holding Rice to 55 last Saturday and UNT to 52 today, they are really playing some good defense, so it was nice to see us get some payoff. We’ve been losing those close games and we came away with a big one today. I couldn’t be more proud of them.”

UTEP made the big shots when it mattered most to clinch the victory. With the game tied at 50-50 with 4:11 left in the game, Destiny Thurman and Isis Lopes hit back-to-back jumpers before Gallegos and Lopes doubled up on three-pointers to stretch the lead. Gallegos iced the game with a pair of free throws as the Miners out-scored North Texas, 12-2, over the final four minutes to claim a 10-point win at home.

“Isis’ shot was huge and that’s when you could really feel the momentum sort of change for good,” Baker said. “Isis played the way Isis can play. She is just a talented, good player. We certainly needed her today. She defends, she rebounds and today she scored. She is a very talented player and we look forward to her growing with this group and getting it done.”

The Miners shot 50 percent from the field (26-52) and 20 percent from behind the arc, but UTEP came up with a pair of crucial three-pointers over the final four minutes when it mattered most.

“I believe in this team and I believe we can shoot it,” Baker said following the win. “For whatever reason, we’re having a hard time right now, but we are going to stay at it, get in the gym and keep working at it. Hopefully, more balls will go in the hoop in the future. A lot of it is learning how to play on a Friday and Saturday. I’m not in the excuse-making business, but I just want to make sure that we are doing things the right way that’s the best for success and hopefully we’ll make more shots as we move forward.”

North Texas entered the game on a five-game winning streak and had an unblemished record in Conference USA play until today’s outcome. The Mean Green were led by N’Yah Boyd, who had 19 points in the game to go along with three assists and three rebounds. Tommisha Lampkin led UNT on the boards with six rebounds, while Destinee McDowell added five rebounds.

“We beat a very good North Texas team,” Baker said. “This is one of the best North Texas teams they have had in many years and it sure showed. They are super hard to guard. In the past couple of years, I would say this is one of the bigger [wins] because they are a good team. But you know, we are a team on the rise and I hope that people see this in our conference and take note that we are to be dealt with. That makes me feel good because these kids deserve it,”

UTEP led for the majority of the game, holding the lead for more than 36 minutes, while the game was tied just three times during the contest with only four lead changes. For the second night in a row, UTEP won the battle in the paint with 28 points compared to 20 by North Texas. The Miners also got support with 24 points from their bench.

In the fourth, UTEP put together its most efficient quarter after shooting 58.3 percent (7-12) to out-score North Texas 19-11 in the final period.

In addition to impressive performances by Gallegos and Lopes, Avery Crouse led the team on the boards, tying her career-high with nine rebounds on the day to go along with eight points. Michelle Pruitt also had eight points and four rebounds to help lead UTEP to victory.

Up next,  UTEP will now travel to take on Louisiana Tech on Jan. 22-23 at the Thomas Assembly Center in Ruston. Friday’s game is set to tip off at 5:30 p.m. MT, while the second game is set for 3 p.m. MT on Saturday in Ruston. The Lady Techsters are 9-3 overall on the season with a 4-2 record in C-USA play following a pair of wins over UTSA this weekend.