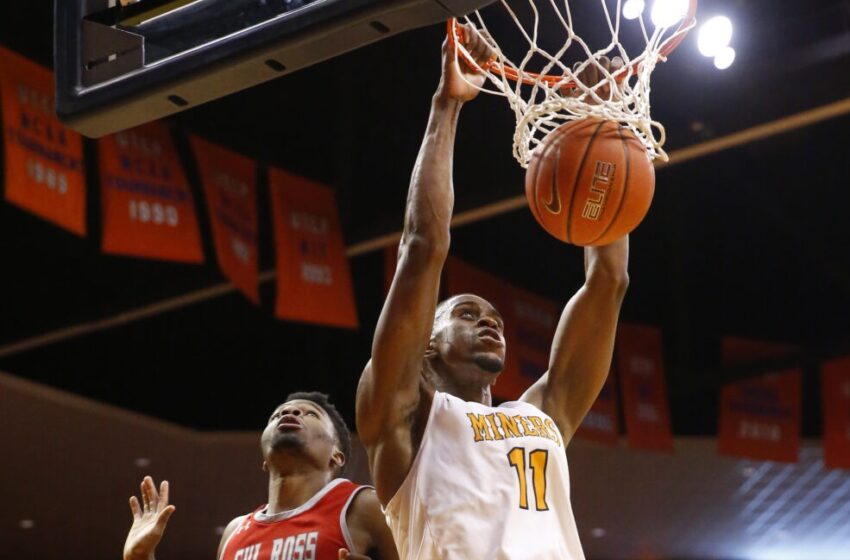 Souley Boum and Bryson Williams combined for 60 points and each recorded double-doubles, leading UTEP past a pesky Sul Ross State team, 84-65, on Saturday night in the Haskins Center.

The Lobos gave the Miners (2-0) a scare, going into the locker room with the lead (37-35). However, UTEP came out of the second period with energy and outscored Sul Ross State, 49-28.

Boum and Williams surged their squad in the second. Boum set career highs in points (34), assists (11) and steals (four), while adding five rebounds. Boum was also the only Miner to get to the free-throw line, stroking a perfect 13-for-13, and went 5-of-8 from three-point land. William grabbed a UTEP career-best 13 boards with 26 points (18 in the second half) on 13-of-19 shooting and two blocked shots.

“I thought our intensity was much, much better to start the second half than where we were to start the ball game,” third-year UTEP Head Coach Rodney Terry said. “You’re not going to get an easy game when you’re playing against an older team that is going to compete and go as hard as those guys [Sul Ross State] go.”

But besides his offense, Boum played well on the other end of the court.

The Miners jumped out to a quick 4-0 lead but the Lobos used an 8-0 run to take a four-point advantage after a Deveraux Minx three pointer. At the 9:07 mark, Boum drained one of his five threes to give UTEP a 23-19 edge. But SRSU used an 18-12 run down the stretch of the first period to take the halftime lead.

Williams came out of the locker room and scored UTEP’s first eight points. The Lobos wouldn’t go away, however, as they took a trio of four-point leads early in the second period. Down 51-47, Adam Hess hit a three off the bench and Keonte Kennedy came up with a bucket on a Hess assists that gave UTEP the go-ahead lead, 52-51 at the 12:43 mark.

The Miners outrebounded the Lobos, 39-29, and grabbed nine offensive boards that led to eight second-chance points. UTEP forced 17 turnovers which led to 31 points off turnovers.

Up next, UTEP will take the road to take on WCC team Saint Mary’s (Calif.) in Moraga on Tuesday, December  8.

The Miners and Gaels can be heard on 600 ESPN El Paso with Jon Teicher calling the action. The contest will also be streamed on Stadium.