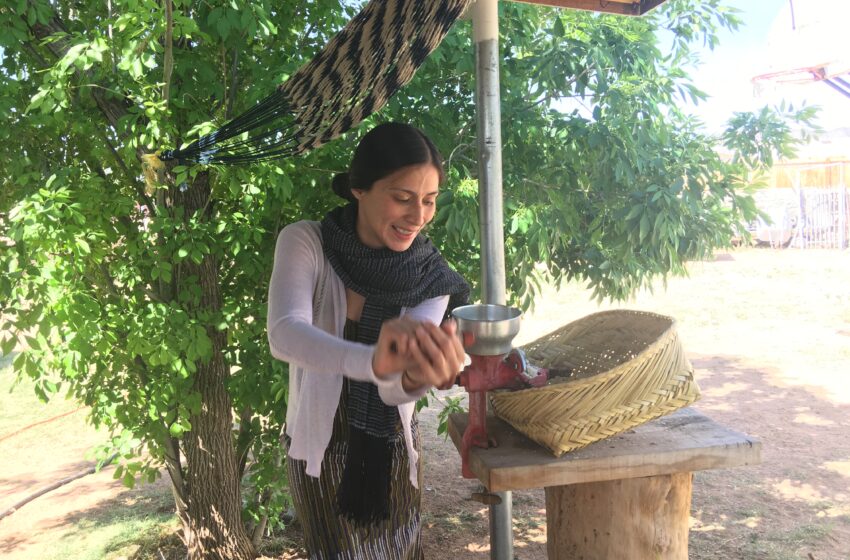 For most people, tortillas de maiz are vehicles for savory guisados, melted cheese or meats. But for health educator and poet Rubi Orozco Santos, they’re a gateway to her pre-Columbian ancestry and rediscovering an ancient technique called nixtamalization.

The tradition and those who still practice it are the inspiration behind her debut book, “Inventos Míos.” Santos will give a reading from the bilingual collection of poetry and prose this Wednesday, August 15 at the UTEP Centennial Museum.

A practice dating back to the Olmecs, nixtamalization involves boiling and steeping corn in an alkaline solution – such as water mixed with limestone or the Mexican mineral salt tequesquite – so that the grain can be used to make food like tortillas, tamales or gorditas. Nixtamalizing corn reduces its toxins and makes it more nutritious.

But beyond its benefits, the practice is an important glimpse into the past.

“The whole history of corn mirrors migration of people,” Santos said. “This process of nixtamalization is something that traveled through indigenous landscapes for centuries.”

Revisiting the not-so-far-back past, the prose “El Primer Recuerdo: Tlaltizapán, Morelos, 1985” recalls Santos’ aunts working with nixtamal at her family’s tortilleria in her father’s Mexican hometown.

“We used to go to the village during the summers and stayed at the house next to the tortilleria,” Santos said. “At 4 a.m., we could hear the machines and line of people talking. And then my grandma on my mom’s side used to make nixtamal for the family in small batches.”

“Inventos Míos” was made possible through a grant Santos received from the El Paso Museums and Cultural Affairs Department’s artist incubator program. Aside from memories of her upbringing, she used in-person interviews with locals who nixtamalize, polls and research to inspire her poetry.

Going beyond tradition, Santos’ book touches personal struggles, colonization and the oppression and survival of Mesoamericans.

“Nixtamalization is one of the things that the Spanish didn’t value,” Santos said. “They didn’t bother to ask about how indigenous people cooked corn. And so what happens when you don’t nixtamalize corn is that you create a niacin (vitamin B3) deficiency.

“If people are going to eat a lot of corn and that’s their main grain and they don’t nixtamalize it, there’s a wasting disease called pellagra that affects the skin that leaves lesions, and you could eventually die.

“There was 200 years of this illness in places like Europe and North Africa before medical researches started to wonder, “How come the Mexicans and the indigenous people in Guatemala don’t get this sickness?”

With a health science bachelor’s from UTEP and a public health master’s from the University of California at Berkeley, Santos is a passionate advocate for food security and nutrition for underserved communities.

“I started with a focus on hunger in immigrant communities,” Santos said. “Why are farm workers lacking food when they’re the ones harvesting food?”

Growing up eating nutritious ingredients like verdolaga, a local plant many disregard as a weed to get rid of, Santos is equally passionate about food her ancestors ate and plant-based eating in general. Her most impactful teacher was her grandmother.

“She taught me how to look at a tomato and notice its color, how firm it is and the shape of it,” Santos said. “She used to even kiss them. She’d be like, ‘Look at the beautiful things nature makes!’”

The resounding message throughout Santos’ book is that keeping ancestral traditions alive is essential for survival. One clear example is in the poem, “Movement at the Mill”: