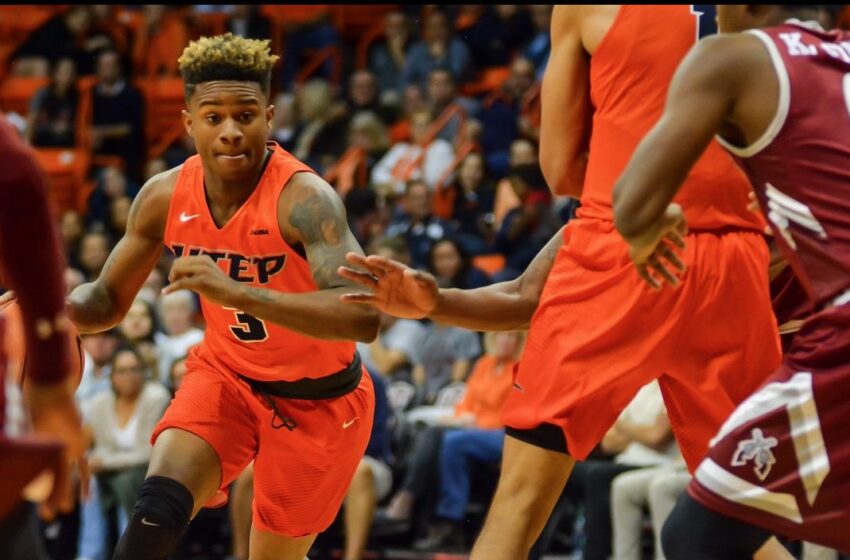 A.J. Harris scored 18 points, and Jemerrio Jones had a double-double with 11 points and 13 rebounds as NM State dominated UTEP, 80-60, on Thursday night at the Don Haskins Center.

“We tried to play a little different style tonight and it was new for our team,” said UTEP Interim Head Coach Phil Johnson, who took over for the retired Tim Floyd.

“We had 48 hours to get ready.  Not an excuse.  And we tried to get a little more aggressive offensively because we have been offensively challenged.  We haven’t scored the ball very well, and so we wanted to be aggressive and we interpreted that the wrong way.  We interpreted that, which I’m not surprised by it, that we shot it very quickly, a lot of forced shots, a lot of quick shots, and those shots didn’t fall.  And then the turnovers were really bad.  I didn’t think we guarded anybody tonight and I just told the team, and really it was a lot of our veteran guys that disappointed and we told them that.  We have one day to get ready to play another good basketball team and then a week [off], and we’ll use those days to get better.”

UTEP had scored 63 and 52 points in the previous two games since losing Matt Willms to a broken hand.  That called for some changes to the offensive execution.

“Just coming into this game, again with limited time, we had really looked at our offense, particularly late clock, and there just wasn’t enough attack to us,” Johnson said.  “There was a lot of standing around, it became a lot of one-on-one.  And if you look at our stats through the last two games, we had seven assists in the Lamar game and eight assists in the New Mexico State game the other night, and tonight we had four.  So I told the team, one guy ought to have eight assists.  We had Dominic Artis last year many games [where he] would have eight, nine or 10 assists.  Our whole team had four.  So the ball’s not moving enough and we’re not sharing the ball enough.  The change that we made was, let’s get more aggressive with our cutting and screening.  We’re living behind the three-point line and we just kind of gave up on it, the team did.  I don’t know if they didn’t really understand what we were trying to do, we tried to be real simple with what we were trying to run.  And it was just no good.  But that’s really with one day of practice, so I guess I shouldn’t expect any more.  I am disappointed in some guys’ effort and a few guys with how they defended tonight, because they shot the ball 54 percent.  That’s ridiculous.  We’ve got to get better at that and we will.”

UTEP’s Keith Frazier opened the second-half scoring with a three-pointer and the Miners were only down 11 at 37-26.  But NMSU scored the next eight points and that really was the story of the second half.  Every time UTEP crept within 15 points, the Aggies went on another run.  And the lead ultimately ballooned to as many as 24 points.

After the Aggies went ahead 3-0, the Miners scored 11 of the next 13 points.  But that was UTEP’s only run of the night.

“I think we came out real aggressive and they came out with a press which we knew they would, and I thought we did a nice job early against the press,” Johnson said.  “Isiah Osborne had two breakaways right off the bat.  And we got it at the rim.  So that part was good.  And we had really worked on that, and I was pleased with it the first seven minutes or so.  And then it became quick shots and quick shots led to runouts on their end and rebounding coming in transition.  We didn’t get back very well.  There really wasn’t anything that I felt like we did very well.  But we tried to implement a new style within a few days and we’ll stay with that.  We’re not giving up on anything.  I heard some guy say we’ve got to play zone.  No, we’re not going to go junk everything because we played so poorly.  We’re going to get what we do better.”

The Miners will host another long-time rival, New Mexico, for the first time since January of 2008 on Saturday.  Tip-off is set for 7 p.m. MT and tickets are available by calling 747-5234.