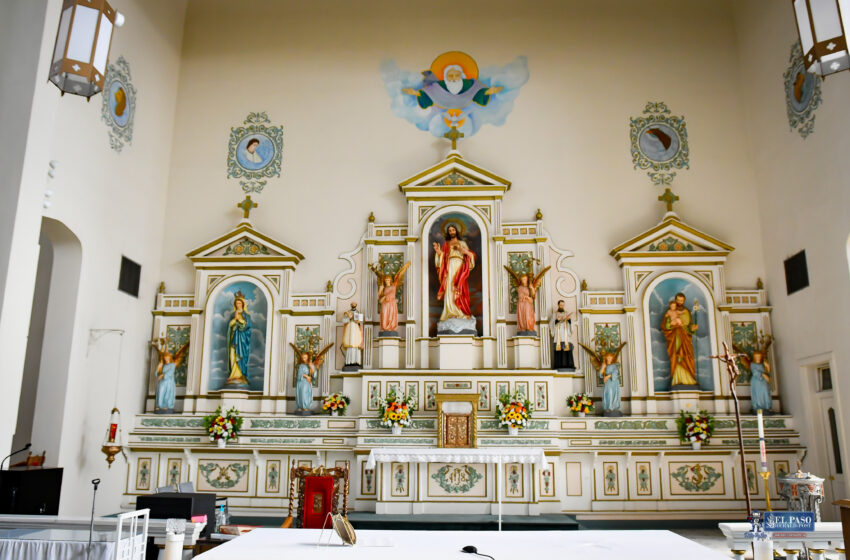 Sacred Heart Church in the Segundo Barrio to be Restored

Thursday morning, a group of residents and volunteers announced their project to restore Sacred Heart Church in the Segundo Barrio, along with the adjoining ex-Sacred Heart School building and the building housing the Jesuit residence and parish offices.

“Sacred Heart Church, the most iconic building in the Segundo Barrio, was established in 1893 by Father Carlos M. Pinto, a Jesuit missionary from Italy, in order to attend to the spiritual and educational needs of the primarily Mexican immigrant community. Sacred Heart Church and Immaculate Conception Church are the oldest Catholic parishes within our city,” officials shared.

The buildings of the Sacred Heart Church complex are between 91 and 127 years old and in dire need of restoration and infrastructural upgrades, but the limited financial resources of the barrio parish has made major improvements impossible.

“Thousands of El Pasoans were baptized or married in Sacred Heart Church and tens of thousands from both sides of the border have participated in mass there or joined community events. Thousands also attended Sacred Heart School,” officials said.

“The Jesuit parish has deep roots and connections in the Mexican/Mexican-American community and with the El Paso community at-large, and close ties to the many families who reside in Segundo Barrio, so much so that it has long been known as el corazón of the neighborhood.”

According to the group, an all-volunteer group will apply for the necessary grants and tax credits, raise funds from the community, and oversee the restoration, from the solicitation of architectural bids through the completion of all work.

The Advisory Council consists of professionals and local leaders who are strong supporters of Sacred Heart Church and proponents of historic preservation.

A new website, www.restoresacredheartchurch.org, is where supporters will find a complete list of the 23 volunteers as a well as a “Donate” tab for contributing to the  project.

Officials say that the restoration of Sacred Heart Church will be the first project of its type in the Segundo Barrio National Historic District, which will be established in 2021 thanks to the El Paso County Commissioners Court, Texas Historical Commission, and National Park Service.

“It is our hope that many other historic preservation projects will follow and that Segundo Barrio will see an architectural Renaissance,” officials added.