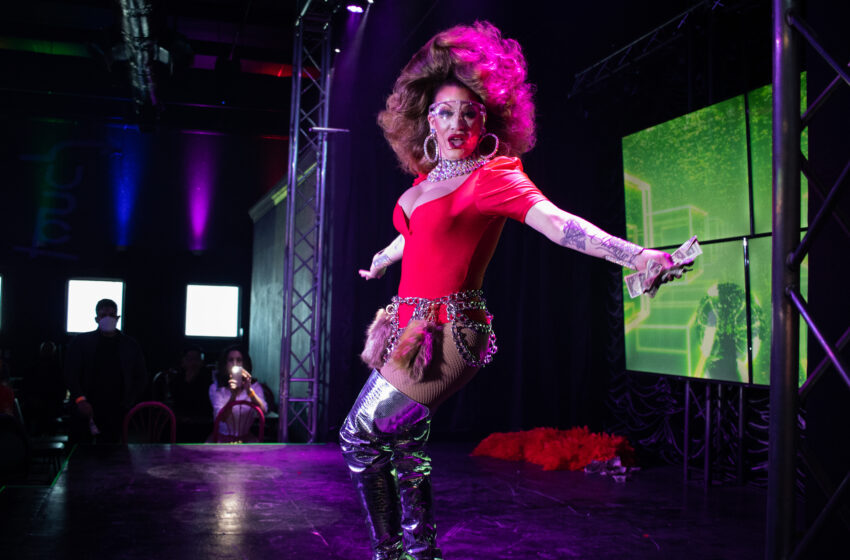 On March 24, El Paso reached the one-year mark of its lockdown. After all Pride celebrations were canceled last year, the drag queen scene in the Borderlands ramped up their efforts to keep the spirit alive.

For nearly a year, uncertainty prevailed among Texans even though lockdown orders were temporarily lifted. While some businesses continued to operate since June, several businesses, including bars, closed as they were considered non-essential.

This was the case of Touch Bar El Paso, a local watering hole that hosts drag queen shows. Now, with a kitchen, bar, and patio, Touch Bar brought back the club drag scene to the community on the U.S.-Mexico border at the beginning of this year.

The audience ranged from 12-year-olds to older elderly women who dressed up as “divas.” Right next to the stage, an elderly couple would tip each and every one of the girls. It was brunch time and people were diving into a range of plates like Caldo de Res, among others.

“When you walk through these doors, we want you to know you have a family, and you’ll be okay. You’re not alone,” said Nikko Andrews.

Andrews worked as show director, emcee, and show host for 19 years while he also booked queens for bars in El Paso. Even while Andrews runs his own development company, he said he will continue to “advocate for [the art of] female impersonation.”

Backstage, Vivica was ready to perform while the other queens were getting ready for the show.

Vivica started as a Drag King nine years ago when she was a college student in Phoenix, Arizona. She identifies as a cisgender woman, until she participated in a national pageant and found out cisgender women could also perform as “diva queens” – which is another expression of drag queens specifically for those who identify as women out of drag.

Three months later, she went to a talent show as a diva and never looked back.

Vivica was born in Germany but her family’s military life brought her to Texas, That’s how Vivica’s family found their way to the border city. With Fort Bliss forever intermingled with El Paso, Vivica’s path was a familiar one.

Drag is her side gig. She works at one of the main stores on base, which Vivica calls “kind of like a Target for the military.”

“I’m grateful that I had that [the store job] because if not, I don’t know how I would have survived this pandemic so far,” she said.

While bars were closed, Vivica’s best bet at performing came from the internet.

She performed online and described her experience doing “digital drag” as a learning process. Vivica produced and edited her own videos.

“You try and figure out how to have that energy without having the energy from the crowd,” she said.

Vivica recognized there’s “still a pandemic outside.” Still, she feels grateful that, while following the guidelines, people would come to the shows and the owners of the bars take care of them.

She informed: “The bar tries to keep the Queens safe…sanitize, and wear masks…. We’re still able to do what we do, but we have to be cautious. ”

Sabrina Marie, a 20-year-old student, has been performing for the last three years. Sabrina created their drag persona the same day of their birthday.

On the day of their birthday, Sabrina went to a talent contest hosted in Touch Bar and won the contest as Sabrina for the first time.

Sabrina described their generation of drag queens as the ones who look up to the famous reality show Ru Paul’s Drag Race to gain inspiration from the art.

“This is like a uniform,” said Sabrina, who finds their drag as a safe place.

Sabrina said entertaining people is not an “easy job.”  The current college student believes high school extracurricular activities like the dance team and cheerleading led them to start doing drag. “I was already out with people, might as well go and do something,” they said.

Sabrina started doing drag for fun, and it slowly became a “second job” for this college student.  “If I could, I would do it full time,” Sabrina added.

On the way out of the dressing rooms, Adrian Sánchez– known on stage as Jaidah Connors Simon’a–was adding color to his eyelids.

Sánchez opted for the Mexican tradition to celebrate Jaidah’s fifteenth year of existence “someway and somehow.” He humorously added, “we’re in El Paso, honey,” meaning that American and Hispanic celebrations go hand-in-hand in the city.

As soon as Jaidah went out on stage, the crowd recognized her, and cheered her up, as Jaidah is known for being a dance queen and leaving everything on stage. Jaidah’s performance didn’t disappoint.

However, after the show, Sanchez said the audience, the laughs, claps and energy is his energy boost. The lack of live audience throughout the hardships of the pandemic was one of the most difficult moments as a performer, according to Sanchez.

Some performers had to host virtual drag shows via Facebook, Twitch and Instagram. As well as going through the process of cultivating an audience online and linking their payment service accounts so they could receive tips.

“We had to learn to go through a loophole to continue what we do, and have our fans still enjoy us in the comfort of their own homes,” said Sánchez.

Despite the difficulties and throughout the tough times that brought the pandemic, Sanchez has never given up in the art of drag, as it has allowed him to express himself through the art of female impersonation. “It takes dedication and passion to come up with an idea and execute it.”

“Although I don’t do it full time now, it still makes me happy knowing I can entertain a crowd and know they’re having a good time..,” Sánchez contended.

London Adour visited El Paso as part of a tour. She is originally from Las Vegas and came down to El Paso to perform. She described El Paso as “a welcoming” community for the drag scene.

Adour is also a weekend show hostess and resident entertainer at Piranha Nightclub in Las Vegas, famously known for hosting recognized drag queens who have participated in Ru Paul’s Drag Race in the capital of the desire.

“I’ve been to 17 states, and I have to say Texas will always be the most loving and accepting and the most motivating drag state,” Adour said.

She stayed for two days and lived her bi-cultural experience to its fullest. Andrews mocked her for not speaking Spanish during her performance but knowing how to lip-sync to a Spanish song.

It’s so important for these queens to be surrounded by people who appreciate and support their craft. As Andrews described, ultimately, drag is “like walking art.”

As Pride month starts, vaccine rollout continues and the Centers for Disease Control and Prevention (CDC) loosen up face mask wearing and social distancing for fully vaccinated people, the celebrations are expected to come back this year with the excitement of the Borderlander Queens.