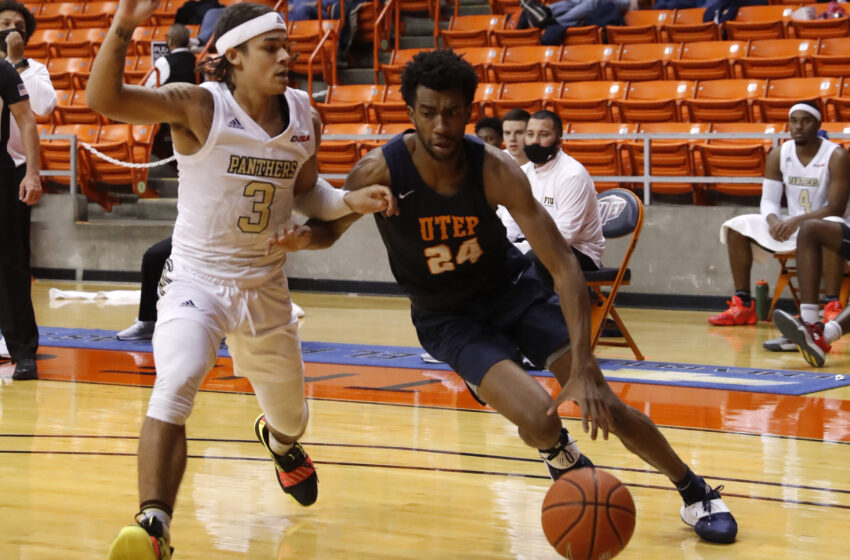 The UTEP men’s basketball team erased an eight-point deficit and used an 18-2 run late in the second half to complete its first sweep of the season by rallying past FIU, 77-68, in front of 478 fans on Saturday night in the Haskins Center.

“We didn’t play great in the first half,” said third-year UTEP Head Coach Rodney Terry. “We had 11 turnovers, that was a big part of that. I thought we came out in the second half and put it on our defense. We’re going to have to guard and work the game and I thought our guys did that. We did a much better job attacking and advancing the ball up the floor.”

Christian Agnew (aka Saucy) produced another stellar night off the bench, scoring 17 points in 26 minutes of action. Bryson Williams tallied 11 points and led the team with nine boards, while Jamal Bieniemy also chipped in with 11 points and three assists.

Besides limiting the turnovers down the stretch, Boum was instrumental at the foul line. After missing a pair early in the second half, Boum went 13-for-13 to finish the ball game. He also added a team-high five assists and snagged a trio of steals.

FIU held the lead up to the 9:39 mark of the second half before a Bieniemy three gave the Miners the lead for the first time, 49-48. And after Keonte Kennedy used a pull up jumper to give UTEP a 51-49 edge, the Panthers went on a 5-0 spurt to take a 54-51 advantage with 7:38 left in the contest. Eric Lovett scored all five points for FIU before the Miners’ offense came to life.

With the Miners down three (54-51), a pair of Williams’s free throws started the 18-2 run. Williams also added a big dunk on an assist from Bieniemy at the 4:27 mark. Boum went 5-of-5 from the foul line during the stretch, while Agnew went 3-for-4 from the line and hit a floating jumper with 3:43 to play. Kennedy hit a jumper, and tallied a steal that led to a fast break dunk with 3:18 left in the ball game.

During the run, Antonio Daye Jr. was called for flagrant foul on Agnew, who hit the floor hard. Boum hit two free throws for the technical called on Daye Jr. following the flagrant, and an Agnew free throw gave UTEP its biggest lead to that point of the game, 59-54.