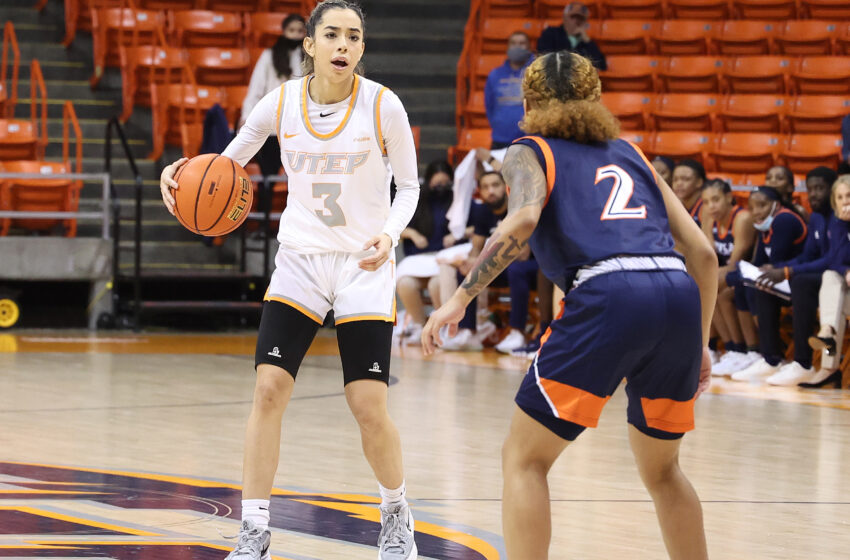 UTEP led wire-to-wire in a 71-59 win on Sunday afternoon in the Don Haskins Center, holding off a resilient late comeback effort by UTSA.

A dominant first 20 minutes saw UTEP jump out to a 37-19 advantage thanks to a 50 percent field goal percentage from the floor and a defensive effort that held UTSA to a 5-of-30 (17 percent) clip.

Right before the half, Teal Battle drove and kicked to an open Erin Wilson in the near corner for a 3-pointer before the break to send the Miners into the locker room on a high note.

In a stop-and-start third quarter that featured a combined 12 fouls between the two teams over a period of 4:27, the Roadrunners started to inch closer, rattling off an 11-1 run heading into the final quarter to cut the lead down to 10 at 54-44.

An Elina Arike layup off a find by Katia Gallegos snapped the run 14 seconds into the fourth, with Gallegos tying a season high with her eighth assist of the game on the play.

UTEP would not convert on a field goal over the next 9:29 until an Arike basket with 17 seconds remaining.

Despite the struggles from the floor, the Miners fought through the adversity by draining 13 free throws in the fourth quarter.

Leading 62-57 with 2:42 remaining, UTEP scored nine of the final 11 points to secure the regular season sweep of the Roadrunners. UTSA did not convert a field goal over the final 4:21 of the game.

“My hat is off to UTSA because they made a great run at us,” UTEP Head Coach Kevin Baker said. “I am proud of my team because I have seen more teams lose games like that than win them, when you have a big lead and somebody makes a big run at you – and you don’t respond and hold them off – but today we did.”

The Miners were led by the second double-double of the season for Battle, who finished with 15 points and 11 rebounds. Destiny Thurman scored in double figures for the 10th time this season with 19 points, five rebounds and two assists. Brenda Fontana contributed five points and six rebounds off the bench.

UTEP took full advantage of 33 attempts at the free throw line, connecting on 27 of their opportunities at the stripe.

“We had to have them,” Baker said. “Those kids make that look really easy, but they know how important those free throws are, and they went up and put them in. I am really proud of them for doing that.”

Jadyn Pimentel was the leading scorer for the Roadrunners with 17 points.

UP NEXT
UTEP heads to the Sunshine State next week for a pair of games, starting with a Thursday contest at Florida Atlantic at 4 p.m./6 p.m. ET.

The Miners and Owls can be heard on 600 ESPN El Paso and the UTEP Miners app with Mando Medina calling the action. The contest will also be streamed on C-USA TV.