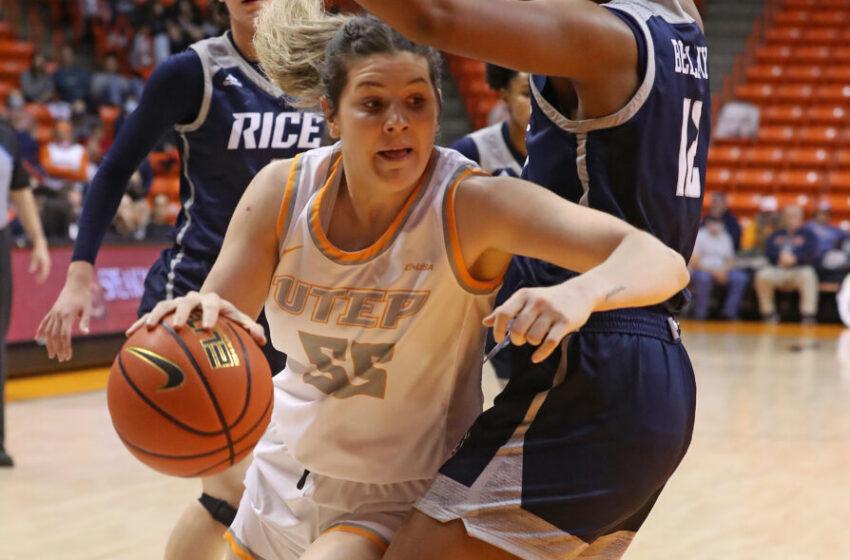 Trailing by five with just over a minute remaining, UTEP fought back to have a chance at the buzzer in a 72-69 loss to Rice on Saturday afternoon in the Don Haskins Center.

After Destiny Jackson split a pair of free throws at the line with three seconds left to put Rice up three, the Miners would have a chance to force overtime on the final possession. Forced to go the full length of the floor in order to register a shot opportunity, UTEP would not be able to get one off prior to the expiration of the clock.

The eventful final minute started with the Miners down 69-64. Erin Wilson ignited the comeback efforts by cutting the deficit to two with a triple from in front of her own bench off an assist from Avery Crouse.

Starting for the second game in a row, Wilson impressed again with her first double-double of the season, scoring 11 points and adding 10 rebounds.

Following the Wilson 3-pointer, she then drew a charge on the defensive side of the floor when Ashlee Austin ran her over after she was set.

With the ball and a chance to tie or take the lead, UTEP turned the ball over. The Miners would get another opportunity though when Destiny Thurman forced a tie up in front of the Rice bench, earning her team a fresh possession on the alternating arrow. An over-and-back violation on the ensuing inbounds play would nullify the opportunity though, giving the Owls the ball back.

“It’s just a tough way to lose a basketball game,” UTEP Head Coach Kevin Baker said. “The last thing we told them before we left the huddle was to make sure we throw it all the way into the backcourt, but the kids are kids and that is the way the game is played sometimes, and sometimes that kind of thing happens when inbounding. Quite honestly, I don’t like calling timeouts late for that reason because you learn as a young coach that when you call a timeout late then you’ve got to get it back in bounds.”

Jackson then hit two free throws to extend the advantage to 71-67.

Needing a quick basket, the Miners moved the ball up the floor with Thurman finding a wide-open Elina Arike under the basket for a layup to bring the lead back down to two, which was as close as UTEP would get.

In addition to the Wilson double-double, Thurman led the Miners in scoring for the second consecutive game with 15 points to go along with a career-high five steals. Arike had 12 points, Katia Gallegos tallied 10 points with seven assists and Brenda Fontana contributed 10 points with seven rebounds off the bench.

Malia Fisher made all six of her shot attempts in the first half for Rice on the way to a team-high 20 points, seven rebounds, five assists and two steals. Maya Bokunewicz was effective from the perimeter, hitting five 3-pointers to reach her 15 points.

The Miners and Lady Techsters can be heard on the UTEP Miners app with Mando Medina calling the action. The contest will also be covered live on C-USA TV.