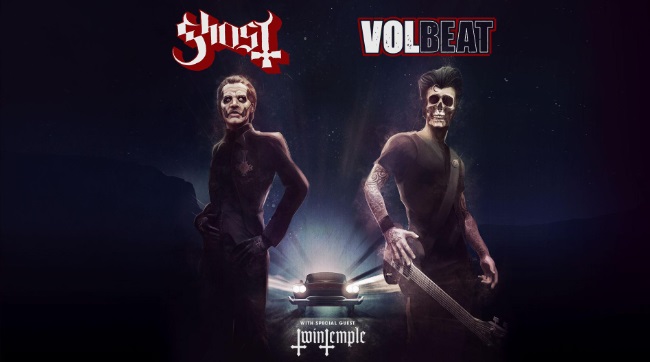 Live Nation and Frank Productions, announced Ghost and Volbeat’s 26-city tour Monday, with El Paso and the Haskins Center as a stop in February.

Grammy Award winning Swedish Rock band Ghost have elevated themselves to one of the most esteemed and celebrated rock bands in the world today. Three consecutive #1 Active Rock radio singles, debuting at #1 (Rock) + #3 (Top 200) on the Billboard album charts, accumulating well over a Billion streams, and now headlining arena tours.

Since forming in 2001, Volbeat has gone from the clubs of Copenhagen to headlining stages around the world, including the famed Telia Parken stadium in Denmark (becoming the only domestic artist to ever sell out the venue).

Over the course of seven record-breaking albums Volbeat has picked up number one songs (including nine #1s on the US Mainstream Rock chart and counting, the most of any band based outside of North America), multi-platinum certifications, awards and accolades (including a Grammy nomination) all over the planet.

General tickets for Ghost and Volbeat go on sale starting Friday, September 24 at 10am local time on LiveNation.com.