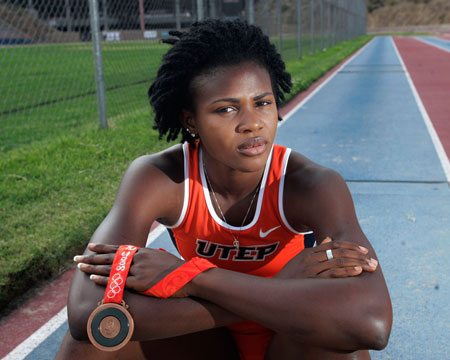 The dream of becoming an Olympic medalist is one step closer to reality for four UTEP Miners who are set to compete for their home countries in the 2016 Olympic Games in Rio de Janeiro, Brazil.

Piller will be the first UTEP alumna to ever compete in the sport of golf at the Olympic Games. She is a former UTEP golf standout who put together a banner senior year, winning the Conference USA championship. She was named the Conference USA Player of the Year and first team All-League after leading the conference in scoring average (72.8) with four tournament titles.

Golf was not Piller’s first love. She grew up playing little league baseball. Her grandparents gave her a set of golf clubs when she was 13 years

old but she didn’t immediately take interest. Instead, she channeled her early athletic abilities into cheerleading and playing soccer and volleyball throughout middle school.

It wasn’t until high school that she decided to take up golf on a suggestion from her father. Throughout her four years of high school she played both volleyball and golf.

Piller began to focus on golf when she began at UTEP in 2003.

“UTEP was a huge stepping stone for me,” Piller said. “I wasn’t a great freshman golfer but I kept getting better every year. I sometimes entertained becoming a pro golfer but couldn’t see the possibility until senior year, when I thought, ‘I can do this!’”

UTEP Golf Coach Jere Pelletier remembers when he first met Piller. She wasn’t very knowledgeable on how to play golf, he said, but had the dedication and drive that would eventually take her far in the sport.

“Gerina is a very talented young lady, and over the years gained a lot of knowledge and continued improving every year,” Pelletier said. “She had a very strong work ethic, put in the extra hours and sacrificed everything to be on the golf course.”

Since graduating from UTEP, Piller continued to thrive in the sport with a stellar professional career. Her pro career got started on the Futures Tour before she earned full playing privileges on the LPGA Tour for 2011. She is currently ranked number 15 in the Rolex Women’s World Rankings.

“Going to the Olympics is a dream come true,” Piller said, beaming with excitement. “I love my country and am so proud to be an American. It’s the greatest honor to represent your country at the highest level. The other day for the first time someone called me an Olympian and I got chills. This is a once in a lifetime opportunity!”

When Amusan began her track season at UTEP in January 2016, it was hard for her teammates and coaches to see what a competitive powerhouse the petite young girl could be until they saw her in action.

Championships with a wind-aided time of 12.79 seconds. She became only the second athlete for UTEP since it joined C-USA in 2006 to be named C-USA Female Track Athlete of the Year.

“When Tobi arrived mid-year, she was not in top form,” recalled Mika Laaksonen, UTEP track and field head coach. “She wasn’t used to competing indoors, but she got better and better with every competition. She is very talented. Little by little she worked her way up, trains very hard, is very dedicated and always comes to practice ready to compete. She knows you compete the way you practice.”

At the Conference USA Indoor Championships, Amusan finished with the third-best time in school history (8.23 seconds) to take gold. She also was able to place seventh in the long jump (5.84 meters) to earn two additional points. Her 12 total points helped the UTEP women’s team claim its second consecutive C-USA title.

“This is a great experience for Tobi and is great for the program at UTEP,” Laaksonen said. “It takes special talent to be competing at this level your freshman year.”

Olympic veterans Okagbare and Martina are seasoned professional athletes ready to take on their next Olympic Games.

This will be the third Olympics for Okagbare, who took home a bronze medal in the long jump at the 2008 Summer Games in Beijing. During her time at UTEP, she enjoyed many successes such as winning four individual national titles, 11 All-America honors and 14 individual Conference USA titles.

She also holds the top spot in eight different events for the UTEP track and field program.

“Blessing is a very smart young lady,” Laaksonen stated. “There is absolutely nothing to prevent her from being the very best.”

Martina’s time competing as a UTEP Miner was short – he attended during the spring 2006 semester only – but he left his mark.

He helped the 400-meter relay squad to a third-place result at the 2006 NCAA Outdoor championships. As an individual, he took fourth in

“Churandy was a very dedicated UTEP athlete,” Laaksonen recalled. “He ran for UTEP for a year and in that short time went pro. That’s what he does, that’s his day job! He is very self-motivated.”

Martina recently finished third in the men’s 100 at the London Anniversary Games, boosting his confidence before heading to Rio.

“It is always an honor to compete at the big stage of track and field,” Martina said. “It’s my fourth [Olympics] and I’m really looking forward to doing great at this one, better than all the rest.”

The courage to dream, a winning spirit and the strength to challenge themselves to reach new heights are traits that all these athletes have in common. Whether it is their first or fourth time to bask in Olympic glory, these past and present UTEP Miners make their University proud.

“There is no other competition like Olympics,” Laaksonen said. “It is the ultimate test for athletes, and winners will be remembered forever. What a great opportunity and experience it is for all of them. We wish them the best of luck and can’t wait to see how they compete in Rio. Go Miners!”