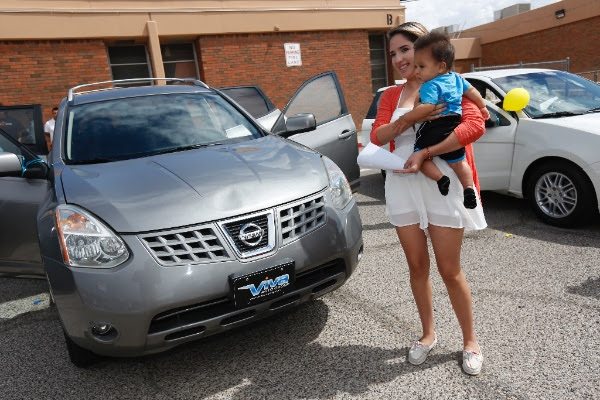 CCTA student Saraih Ruan has kept up her grades and made it to class nearly every day this school year in preparation for graduation. She never imagined her hard work would also yield a free car and a new lease on life.

Thanks to a partnership with the College Career and Technology Academy and the Viva Auto Group, Saraih is now the proud owner of a Nissan Rogue — a car that she says will benefit her eight-month-old son Yahel.

“I feel excited and blessed,” Ruan said. “I just want what is best for my son, and this is going to make it easier for me to get him to places.”

To be eligible for the car, students had to earn A’s and B’s all semester, participate in extracurricular activities, have fewer than five absences and submit a personal essay for review. A committee of judges used a rubric system to determine the score of each essay submitted.

The winner of the contest was announced at the school’s awards presentation.

Before the official announcement teacher Debra Brooks read the winner’s essay. It was not difficult to see who wrote the essay after the first few lines were read aloud.

“It was a very emotional experience. I couldn’t believe it,” Ruan said. “The first thing that happened was the happy tears.”

In the essay, Ruan talks about her struggles not only as a teenage mother but also the financial struggles her family has faced. Despite the many obstacles, she was determined to finish school a year early and hopes to pursue a career as a pediatric nurse after she graduates.

“I had to give time to two really important things in my life — school and my son. I knew I had to focus on graduating and going to college,” Ruan wrote. “Having a vehicle will make a huge impact on my life.”

Ruan had the choice between four different pre-owned vehicles. Ultimately she picked the Nissan because she felt it was the best choice for she and her son.

Viva Auto Group owner Jimmy Dick was on hand to witness Ruan’s tears of joy as she and her son stood in front of their new car.

“I’m really enjoying the day and watching her emotions. It’s great to see,” Dick said. “It will have an impact on her life. She will be able to drive to school and work.”

Principal Adan Lopez was more than happy to see one of his students enjoy the fruits of their labor.

“What this is really about is celebrating student success and impacting lives in a positive way and making dreams come true,” Lopez said. “There has been a lot of changes in her life, a lot of barriers, and we just want to recognize the level of commitment these students have to their education.”