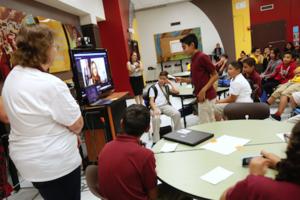 The video chat gave students a chance to ask her questions about her career, life and how she has dealt with bullying and cyberbullies.

“This shows the kids that El Paso is not isolated, that we are a global community because of technology, but most importantly people who are nationally recognized care about them,” teacher Jayne Pynes said. “It’s teaching them that people care about shaping their futures with them and are willing to invest time with them.”

The chat was made possible thanks to Pynes, who messaged Zee during a Facebook Live chat asking her to talk to the Cobra New Tech students.

“I never even imagined that she would even see my message because so many people are all commenting at the same time,” Pynes said. “She told me to email her assistant to talk about it. Within a day, we had a response to set this up.”

Zee encouraged students to pursue what they love, sharing her own personal journey. She told them she knew at an early age she wanted to study weather.

“When I was about 8 or 9 I would watch thunderstorms come across Lake Michigan, and I could see those storms for miles and miles,” Zee said. “I fell in love with watching those thunderstorms form. That’s where my passion began.”

She followed her passion, earning a degree in meteorology from Valparaiso University in Indiana and started working at several media outlets before becoming chief meteorologist for Good Morning America in 2013.

“She pushed herself to the limit to become a meteorologist,” Richards said. “That makes me feel like an accomplish anything I want to if I set my mind to it.”

Richards wants to motivate others to achieve their goals too — in her own way.

“I want to become a singer,” she said. “I want to inspire people to follow their dreams through music.”

Zee also gave the students advice about how to deal with bullying, something she herself has experienced in her life.
“A lot of bullying comes from online so I learned to separate my feelings and realize people online are people, too,” Zee said. “So I say, ‘thank you for your opinion,’ and that makes them realize I’m a real person they are talking to. It has really made me stronger and helped me become a better person.”

“I learned if you are being bullied to just ignore it and focus on your own work and what you are doing,” Singer said.

Zee was not the only one who took the time out of her busy schedule to visit with the students. ABC-7 morning anchor Stephanie Valle visited Canyon Hills earlier in the week to prep students for the interview.

“Getting to see her first really helped the students,” Pynes said. “She taught them interview etiquette, and they got to hear about what she does. She was just so beautiful and calm â€“ a positive role model for all of our kids.”

After the interview, students discussed what Zee said that most touched them.

“They are going to write a reflection about what was the most influential thing they learned,” Pynes said. “It gives them an opportunity to really think about everything she said and what impacted them the most.”