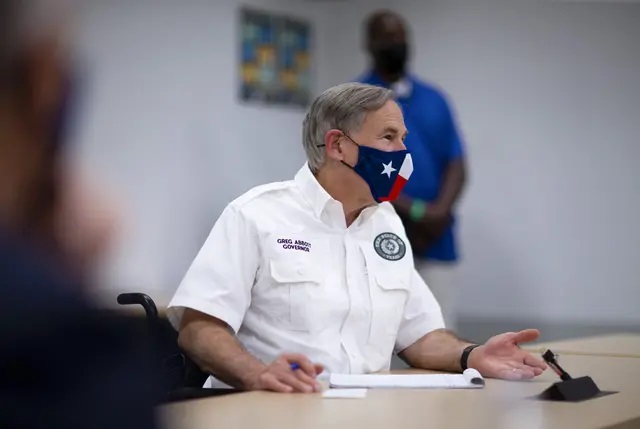 Gov. Greg Abbott met with local leaders in El Paso in August to discuss the coronavirus situation in the city and state. Credit: Ivan Pierre Aguirre for The Texas Tribune

Gov. Greg Abbott on Thursday touted the arrival of a new antibody treatment as progress in Texas’ fight against the coronavirus, while again ruling out any new statewide business restrictions as the state experiences alarming growth in cases and hospitalizations.

“It is important for everybody in the state to know that statewide we’re not gonna have another shutdown,” Abbott said during a news conference in Lubbock. “There’s an overestimation of exactly what a shutdown will achieve, and there’s a misunderstanding about what a shutdown will not achieve.”

Abbott traveled to hard-hit Lubbock to trumpet the fact that bamlanivimab, the antibody therapy made by Eli Lilly & Co., is being distributed across Texas. Abbott has pointed to the emergence of such treatments, as well as his policy that claws back Texas business reopenings based on regional hospital capacity, to defend Texas’ approach to the virus as it spikes in the state.

While Texans wait for widely available treatments and vaccines, Abbott said, they should “remember the habits that got us through the spike of COVID-19 cases in July” — things like staying home if possible, wearing masks, social distancing and using hand sanitizer.

“We’ve been there before, we can do it again,” Abbott said.

The federal government approved bamlanivimab under an emergency authorization 10 days ago. It uses a laboratory-generated antibodies to attack the coronavirus. Antibodies are pathogen-fighting proteins the body forms in its immune response to infections.

Supply is extremely limited. Abbott declined to say how many doses are coming to Texas but said the state was receiving the second-largest distribution out of all states, behind only Illinois — likely reflecting the severity of the state’s outbreak.

As for the qualifications to receive the new therapy, Abbott said it is usually for those “65 and older with some other health care-based issue and early-stage COVID.” Many nursing home residents “would automatically qualify for this,” Abbott added.

He said hospitals could administer the therapy on site, at ancillary units, via a “mobile ambulance unit” and at nursing homes.

Despite the arrival of the new treatment, Abbott and other officials who spoke at the news conference said Texans should not let their guard down. Nim Kidd, the head of the Texas Division of Emergency Management, said the emergence of treatments — and the promise of a vaccine — is “not an excuse” to abandon guidelines that have been in place throughout the pandemic. For example, he added, “just because you have seatbelt in your car does not mean you should speed and drive reckless.”

Texas reported 8,489 new cases Wednesday, continuing to mirror the levels that the state saw during its summer surge. On Tuesday, the state set a new record with 10,823 new cases.

Hospitalizations also remain high — there were 7,958 on Wednesday — and the positivity rate, or the ratio of cases to tests, has stayed above 10% for over three weeks. Abbott has said anything over 10% is a “warning flag.”

As Texas has grappled with its latest spike, tensions have again flared between the state and local governments. Attorney General Ken Paxton has gone to court to halt El Paso County’s order to close all nonessential businesses, which a state appeals court blocked for a second time Friday.

Abbott has resisted giving local officials more latitude to fight the virus and accused some of not being strong enough on enforcement, an accusation he repeated Thursday. Asked for an example of a local government doing a good job when it comes to enforcement, Abbott told reporters he “candidly [has not] seen a lot of quote ‘enforcement.'”

“Most enforcement that we see is done by TABC,” Abbott said, referring to the Texas Alcoholic Beverage Commission, which regulates bars.

Abbott’s news conference in Lubbock was his first since mid-September on the pandemic. It also came a week before Thanksgiving, during which public health experts are urging Americans to not get together with those outside their household.

Asked about holiday gatherings, Abbott did not get as specific, only saying Texans should be “personally responsible.”

“But they should know that, listen, the cavalry is coming as it concerns COVID-19,” Abbott said, again nodding to the treatments.

In El Paso, however, where hospitals are nearing a point of rationing health care and county jail inmates are moving bodies from makeshift morgues, local officials’ pleas for help from the Texas Army National Guard seemingly still went unanswered. The county judge and sheriff’s office hoped the military force, under Abbott’s command, would relieve the inmates from the grueling work, but a spokesperson for the sheriff’s office said Thursday that had not happened.

Democrats said Abbott was placing too much hope in the antibody therapy.

“I hope this new treatment is successful and saves lives, but Gov. Abbott should return power to local leaders so they can take decisive action to curb the rampant spread of COVID-19 in their communities,” state Rep. Chris Turner of Grand Prairie, head of the House Democratic Caucus, said in a statement. “Resigning ourselves to more people falling ill while focusing exclusively on potential therapies is not the strong response that is required.”