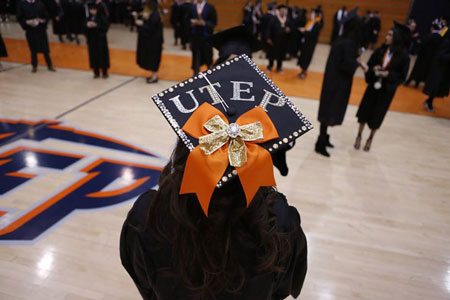 Commencement is a time for graduates to celebrate their academic achievements and reflect on their personal experiences at UTEP.

Whether students joined their parents in class, moved to El Paso from a different country, or met their soulmate on campus, these unforgettable experiences enriched their education and made their journey to graduation a little more special.

Here are stories of four students who graduated from UTEP on Dec. 10, 2016 and how their personal experiences at the University shaped their lives in ways they never imagined.

Both graduated with Ph.D.s in environmental science and engineering, but Annalisa walked on stage to be hooded first. She was followed by her father.

Their journey began when Luis intended to take the GRE with two other study partners who were unable to take the test at the last minute. Annalisa decided to join her father because she didn’t want him to have to do it alone.

“Receiving an education is a wonderful blessing; obtaining one with your loved one is something to cherish,” said Annalisa, who has a bachelor’s in history and a master’s in environmental science from UTEP. She also holds a law degree from Arizona State University.

“We recognize it is a privilege to receive our Ph.D.s together and we chose to walk to honor all those who encouraged our endeavor, most importantly our greatest advocate – my mother.”

“She did better on the writing part, but I did better on the math,” recalled Luis, manager of campus sustainability and energy conservation at UTEP. He received both his bachelor’s and master’s degrees in civil engineering from the University.

After he began working at UTEP in 2012, Luis thought the time was right to pursue a Ph.D.

Annalisa joined her father in taking classes. She was attracted to the program because it allowed her to combine her love for both liberal arts and hard sciences.

Lupe Perez offered her husband and daughter moral support and snacks while they studied together. When times would get tough, she would remind them how fortunate they were to have each other.

“It’s very satisfying and very gratifying to do this together,” Luis said. He plans to use his degree to help UTEP grow its sustainability efforts, obtaining grants for the University and its energy projects.

“Annalisa has a way of making things happen,” Luis continued. “When we’re working on our papers, it takes me twice as long to finish. She thinks with both sides of her brain. She’s very capable in many things.”

Searching for Her Roots

Amamori, the eldest child of a Japanese father and Mexican-American mother, was born in El Paso but raised in Japan after her father’s employer asked him to return to the homeland.

She was 5 years old at the time and already spoke English and Spanish. The move was a culture shock.

At age 17 she decided to return to El Paso to live with her maternal grandparents and learn about her Hispanic culture. She experienced many of the same “outsider” anxieties upon her return, but she navigated those language and culture challenges through perseverance and campus involvement.

Amamori successfully used the same participation strategy at UTEP, where she earned her BBA degree in accounting in 2015. She

immediately began her graduate studies while working as a full-time tax accountant for El Paso-based Lauterbach, Borschow and Co.“I was ready for the challenge,” she said. “Life is full of obstacles, but everything works out if you do your best.”

She praised the UTEP faculty for expanding her knowledge, and for teaching her about time management. She added that being trilingual and tricultural has made her more adaptable and open to different perspectives. The graduate also volunteers as a Japanese language teacher and was active with UTEP’s Beta Alpha Psi honors organization.

Amamori said her father, a chemical engineer who had not been to El Paso for 13 years, attended Commencement along with members of her local family to include her younger sister, a junior accounting major at UTEP. Her mother watched a livestream of the ceremony from the family home in Ageo-shi, Saitama-ken, Japan.

Her next goal is to become a Certified Public Accountant. She said she looks forward to working as a public accountant, perhaps at an international level, in America, Japan or anywhere in between.

“It’s time for a new challenge,” she said.

“The main goal of transportation is to improve the quality of life in our community – to connect people to jobs and opportunities, and to provide safe routes to schools so that kids can walk or bike, while also keeping in mind the environmental and economic impacts,” said Vavrova, who graduated from UTEP’s civil engineering doctoral program.

“I found it very professionally enriching,” said Vavrova, who dreamed of studying in an English-speaking country since she was 13 years old. “Combining my experience from Europe with the new knowledge I gained at UTEP gave me a unique perspective as a researcher.”

But sustainable transportation wasn’t the only thing she fell in love with at UTEP.

While pursuing her Ph.D., Vavrova met her future husband, Sergio Maldonado, when he worked in the office across from hers in the Engineering Building. Maldonado graduated from UTEP in 2014. They plan to marry Dec. 22, 2016.

Since she’s been in El Paso, Vavrova and Maldonado have traveled to the Czech Republic every other year to spend Christmas with her family. But this Christmas Vavrova’s mother flew in from the Czech Republic to celebrate her daughter’s graduation from UTEP and upcoming nuptials.

After her celebrations, Vavrova plans to continue her work with strategic transportation planning as a postdoctoral researcher in UTEP’s Center for Transportation Infrastructure Systems.

“At UTEP, I have been surrounded by many inspirational people, from students to professors and staff,” Vavrova said. “They showed me that when you find what you love, put in hard work and perseverance, then anything is possible.”