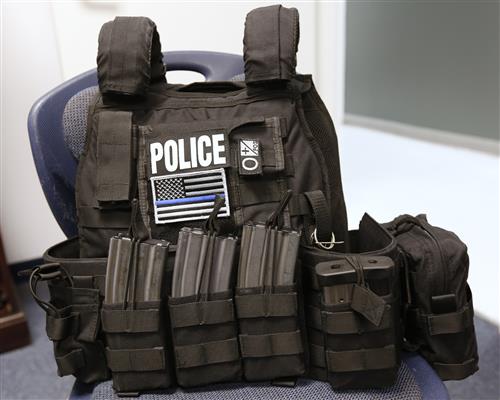 EPISD Police now carry rifle resistant body armor capable of withstanding the impact of high-caliber firearms. The new tool in the officers’ arsenal can protect theirs and other lives.

The need for these vests, and the grant funding to purchase 50,000 statewide, came in response to the 2016 Dallas shooting which left five officers dead. The officers’ vests failed to protect them from shots of a high-powered rifle.

“The standard body armor will handle a handgun rounds,” EPISD Police Chief Victor Araiza said. “And unfortunately, rifles are becoming very prominent in our culture. There have been a lot of rifles used in a mass shooting events.”

Araiza felt it important to pay tribute to the officers whose lives were lost on July 7 in Dallas.

Each of EPISD’s 44 officers affixed a sticker on their new vests with the badges and names of the fallen officers. A quote honors their service and sacrifice: “Gone but not forgotten. Greater love hath no man than this, that a man lay down his life for his friends.”

“The lives lost that day were not in vain,” Araiza said. “They will go on to save other officers.”

The Governor’s Office recognized that rifle resistant body armor was not prevalent throughout the state and grant funding was established through the passage of Senate Bill 12.

“We and other departments were able to apply for this grant and given our responsibilities we were fortunate to have been funded,” Araiza said.

The department received a grant for $20,425 and added $7,000 in matching funds to ensure all officers received the new vest.

Officers are currently being trained to use the heavier equipment, which also includes pockets for first aid supplies and tourniquets. The officer’s blood type also is stitched on a label prominently displayed on the vest.

“This gives the officers the ability to go in to an active shooter scenario and address the situation knowing that that body armor that they have will stop that bullets being fired at them,” Araiza said. “We can also use it to shield someone that we’re attempting to rescue. It’s a huge benefit and it will save lives and can protect not only our officers, but those we serve.”