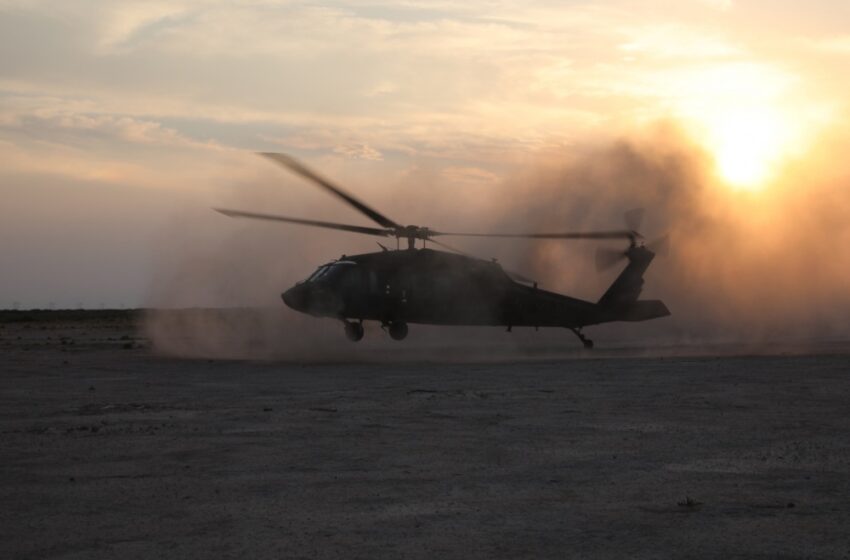 A UH-60 Blackhawk Helicopter lands at a training site at Fort Bliss, Tx., as part of a training exercise for the 5th Special Forces Group (Airborne) and 3rd Brigade, 1st Armored Division on Aug. 21, 2020. For many of the Soldiers from 1st AD, this was their first exposure to training in unconventional military methods and working with partner forces to prepare for future deployments | U.S. Army photo by Sgt. Daniel Mariscal

A team of Green Berets relay instructions to a group of young, enthusiastic Infantry Soldiers under the cover of night.

With a sudden boom, the pitch black landscape becomes as clear as day as a 120mm illumination round spills a flickering white light over the target, off in the distant desert.

These specialized mortars were part of a two-week training exercise where Soldiers from the 1st Armored Division, Ft. Bliss, Texas, learned a wide array of advanced soldiering skills from members of the 5th Special Forces Group (Airborne), Ft. Campbell, Kentucky, that took place at Fort Bliss from August 10th through the 31st.

They trained in vehicle convoy maneuvers, rapid infiltration techniques, medical first-response, and many other combat-related skills.

“There’s a lot of different things we’ve done in two weeks that would normally take my unit a month or longer to accomplish,” said Sgt. Todd Treadway, an Army medic with 3rd Brigade, 1st AD.

Treadway said his time with the Green Beret medics was more fast-paced and adventurous than he was used to. His most exciting experience was treating a medical evacuation patient mid-flight on a UH-60 Blackhawk.

“I had never done anything like that before and I probably wouldn’t get the opportunity if it wasn’t for the capabilities that they have here, and the opportunities you get working with Group,” Treadway said.

Pfc. Hwang Trieu was among several new Infantry Soldiers who came to 1st AD in the past year that participated in the training. For these new Soldiers, this was their first exposure to unconventional methods and working with partner forces.

“This is an honor to be able to train with Special Forces, and if I get the chance I would love to train with them again, or just be one of them one day,” said Trieu.

The exercise also gave the Green Berets an opportunity to experience training partner forces in advanced soldiering skills to enable greater security across the operational environment.

“I know everyone really enjoyed their time out here,” said Treadway. “There’s so much knowledge to be taken back to our units and shared with everyone else, so we’re all thankful to be out here.”