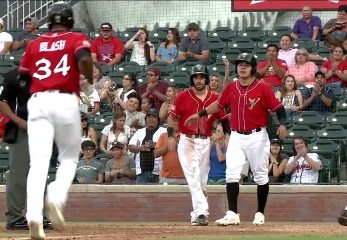 The opening seven Fresno batters reached base Sunday and the Grizzlies carried that first-inning rally to an 11-5 win at Southwest University Park.

The Grizzlies won two of the three games in the rare three-game Pacific Coast League series.

Ryan Schimpf went 1-for-4 with a long solo home run to right field in his first game since being optioned by San Diego. Jabari Blash went 2-for-3 with a three-run home run, his third consecutive game with a homer.

The two teams combined for 56 runs in the high-offense three-game series. The Chihuahuas do not play on Monday.