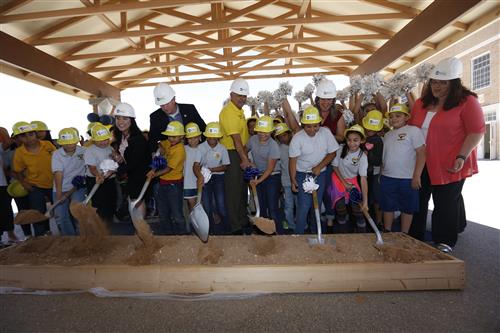 While the school year may be coming to a close, work at most EPISD Bond 2016 campuses is not taking a summer break.

District officials, campus staff and students participated in a groundbreaking ceremony at Crockett Elementary School for the first of the major construction projects that are funded by the voter-approved Bond 2016 program.

Students in yellow construction hats helped turned the dirt over for the start of a $6.9-million renovation and upgrade to the historic Central El Paso school.

Some of the work includes renovations and repairs to the historic façade of the building, new playgrounds and perimeter fencing, new drop-off zone and parking areas, roof replacement, construction of 21st century technology classrooms, and ADA and electrical upgrades throughout the school.

“We have been looking forward to this for quite some time,” principal Elco Ramos said. “We were able to include all the things we had identified from the bond advisory committee, so we are very excited to finally have this in the works.”

Trustee Susie Byrd, who represents the neighborhoods that surround Crockett, talked to the students about her years as a student at the Central school.

“I remember playing kickball on this playground and skinning my knee all the time, but now you guys will be able to play on some grass,” Byrd said. “We want to provide a place where all you’re focused on is learning and staying engaged with your teacher. That’s really what the goal of this project was. We want you to go to a school that you’re proud of – where you go to feel safe and comfortable.”

Fourth-grader Carlos Albidrez is looking forward to the improvements, especially being able to get to school on time.

off zone creates long lines of cars. “It’s really going to clear up traffic when you get to where you drop off your kids.”

Fellow classmate Julian Priego can’t wait to run through the new grass once its planted.

“I think it’s going to be a lot more safe because with rocks around people can throw them,” Julian said. “It’s going to be more fun and safe with grass.”

But perhaps some of the most important work will be in the preservation of the historic building, which turns 100 in 2020, as well as the upgrades in classrooms the school will receive.

As part of Bond 2016, new 21st century classrooms will be built in the school.

“This is a beautiful, old school that deserves to be preserved and admired,” said Board President Trent Hatch. “But that doesn’t mean the kids who attend this campus don’t deserve the latest in technology and instruction. Bond 2016 will help us get that here.”

This is the first in a series of groundbreaking for major construction projects funded by Bond 2016.

The Board of Trustees will soon begin approving contracts for major school construction and renovations that include significant upgrades to 17 campuses.