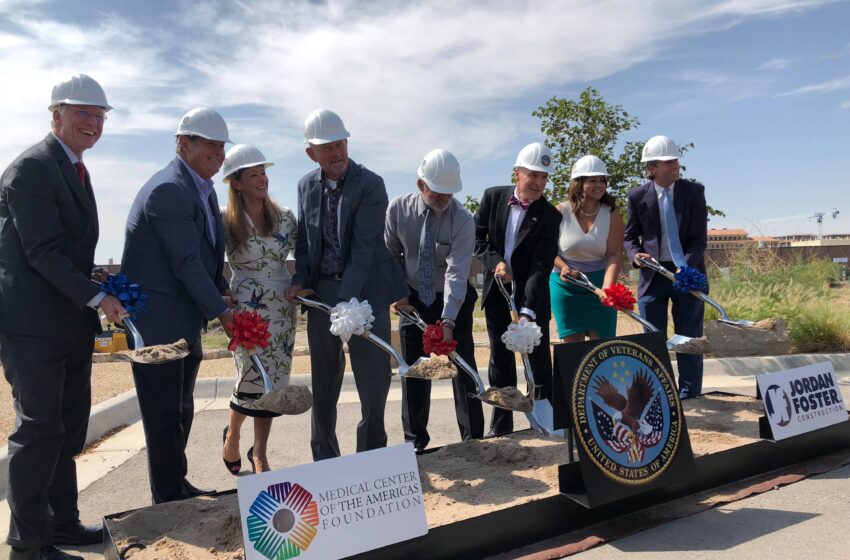 Groundbreaking for a 33,000 square foot facility that will house 163 mental health care employees and provide services to the Borderland’s veterans was held in South-Central El Paso Wednesday morning.

The facility, which will be located just south of the Medical Center of the Americas (MCA) Foundation near I-10 East and Raynolds, is private-public partnership between the United States Veterans Affairs Administration, Texas Tech University Health Sciences Center and the MCA.

Congressman Beto O’Rourke took a brief hiatus from his month-long Senate campaign across Texas to address the need for the VA mental health facility. O’Rourke reflected on the many stories of veterans he’d spoken to in El Paso as part of his 2012 Congressional campaign. “I knew we had a real problem on our hands,” O’Rourke said, recalling the story of one veteran who was waiting over a year for a mental heath appointment.

“During one of my town halls I met a young man by the name of Nick Dimico,” O’Rourke said. Dimico had come to hear the trials that many veterans from across all services branches and generations were having obtaining psychiatric and psychological care from the VA. Within weeks, Nick would take his life. “He’s representative of the more than 20 veterans a day who take their lives, the majority of which who were unable or unwilling to go into a VA,” O’Rourke said.

The South-Central El Paso location is an effort by the Veterans Administration of El Paso to consolidate their mental health facilities into one centralized building in order to free up space at other VA locations.

The collaboration between the MCA Foundation and the VA is nearly 12 years in the making, according to former MCA Board Chair Robert Skov. During his address, Skov gave credit to O’Rourke and MCA CEO Emma Schwartz for pushing the project forward.

After previous stymied attempts, he said it was the leadership of O’Rourke that made the project come to fruition.

Resident physicians from TTUHSC will serve as mental healthcare providers at the new facility which is expected to be fully operational by the end of 2019.