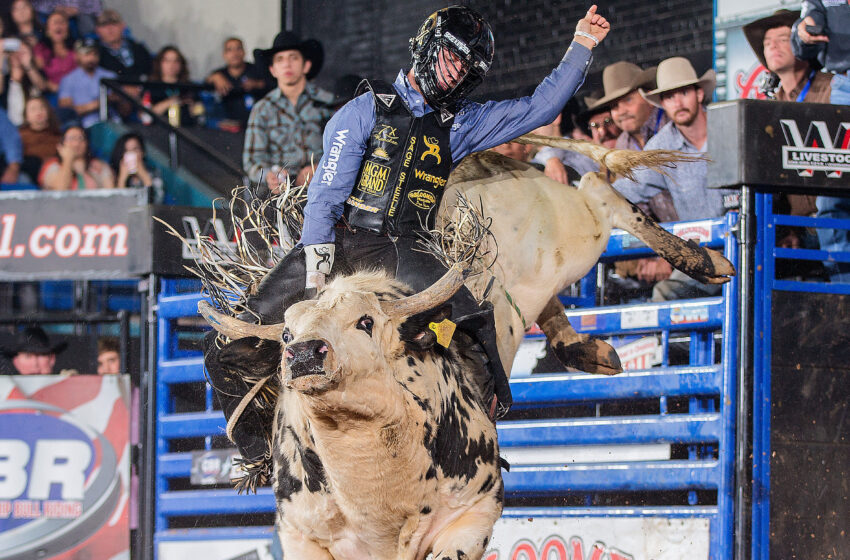 Selecting the bull that bucked him off and cost him an event win two weeks prior, Sage Kimzey made a big move to stay on top of Big Lew in the final four man Shoot Out round to take home the $23,000 check and the championship title of the 2017 Casa Ford Tuff Hedeman Championship Bull Riding presented by Sunland Park Racetrack and Casino.

“Fundamentally he does everything correct, not many riders can ride them away from their hand as well as Sage and that is why he is in the position he is in. He doesn’t enter to win second or third, he comes to win…every time,” said Hedeman following the event.

Kimzey, the only rider on the roster to ride three bulls, thrilled the sellout crowd at the El Paso County Coliseum winning the title for the second time in his young career. Kimzey, the reigning CBR and PRCA World Champion launched his career from El Paso when he won his first CBR Road to Cheyenne event here in 2014.

“El Paso is special to me, I have great memories from right here in this building. I won my first CBR here in 2014 and got my first 90 point score here at the rodeo in this building. The fans here are awesome and they love watching bull riding…you can’t beat the atmosphere, they are knowledgeable about the sport, from the introductions to the last rider they are as loud as you can ask for and it’s always fun to come here,” said Kimzey.

On a night where the bulls were in total control allowing only ten qualified rides from forty outs, Hedeman’s event featured a two hour bull riding that has entertained local fans for twelve years. The Casa Ford Tuff Hedeman Championship Bull Riding featured a field of 24 elite bull riders including three Mexican riders in a three round tournament style event ending in a final four Shoot Out round worth $30,000 to the cowboys and $45,000 to the bulls.

The event was produced for the twelfth time by El Paso native, Tuff Hedeman, the four time World champion bull rider and Pro Rodeo Hall of Famer who grew up in El Paso.

“El Paso is always special, this is my home, I have been coming to this arena since I was a toddler, I have been to hockey games and spent my life coming to this building, I look around the arena and see so many friends and people I only get to see now once a year – I love it here, and I love putting this event on for true bull riding fans and the people who are just a fan of this event,” said Hedeman.

The bulls took an early lead bucking off the first two riders in section one before Kimzey posted the first qualified ride of the night with 88 points on a bull he did not know.

“Nice little bull, had some trouble finding where to put his feet, but he was a good bull and what I needed to advance,” said Kimzey of 121 Bloodshot from the winning bull team of Dawn Collum, C & M Bucking Bulls.

Koby Radley was the only other cowboy in section one to ride and he worked hard for his 87.5 points on 107 Come On Baby, also from C & M. Four buck offs followed Radley until section two saw rookie Boudreaux Campbell light up the crowd and take the lead with 89 points on 9639 Crystal City from Championship Pro Rodeo.

JC Knapp’s rookie bull, 108 Shark Bite, gave Tyler Taylor the assist as they scored 86.5, but the bulls remained in control as the next seven riders failed to make eight. In the final section of round one Eli Vastbinder heard the whistle while still aboard 116 Rock On from K & G and was 88.5.

After spending the afternoon signing autographs at Casa Ford, Jeff Askey got some help from his new friends in the Casa Ford section and moved to the top of the leaderboard with a 91.5 ride on 3381 Wet Willy to win the first round.

With only six riders earning a score in round one, the Semifinal round got started drawing six riders back on time ridden. Casey James Kirwan was the first man in the second round to score with 87 points on Hudgins 136 Hurricane Harry. Travis Briscoe,

Rorey Maier, Juan Alonzo, Tyler Bingham, and Francisco Garcia came down early before Sage Kimzey would be the first to ride two. “I didn’t know the bull, but I saw Caleb get on him in Bossier, and he was good,” said Kimzey.

Kimzey was 90 points which put him in control of the four man with 178 points on two followed by Eli Vastbinder who easily handled Owen Washburn’s Blind Spot for 88.5 points and 177 average on two. Campbell had his hands full with 029 Backjackin and would be frustrated when his effort fell short of the whistle at 7.91 seconds.

Askey, making a bid to win his third title on the Road to Cheyenne, came down quick as he bucked off of 3112 Dirty Blonde in 2.52 seconds.

The four man was set with the top four ranked bull riders in the CBR World Standings coming back to duke it out for the CBR check which is determined by the number of scored rides in the three rounds.

Vastbinder and Kimzey each rode two and they were joined by the next two highest marked rides in the preliminary rounds which were Boudreaux Campbell and Askey who were 89 and 91.5 respectively.

In contrast to his first two draws Kimzey had the opportunity to select a bull he knew well, 1086 Big Lew, owned by Bubba Storey and Rhon Brown.

“I didn’t even look at the rest of the field when I saw Big Lew…Tuff asked me what I thought and I said I know this bull bucks, but I like him,” said the five time World Champ as he selected the bull that ended his night early two weeks ago in Bossier City, Louisiana.

Campbell would ride first and be overpowered by Rhon Brown’s 22 Cowboy Cut. Askey came down quick from 911 Hy Test when the bull got him raised up with no chance to recover which left the top two cowboys of the CBR left to ride. After a vigorous struggle in the chutes, Melton’s IV37 Astro ended Vastbinder’s bid for his second tour win in 2017.

At this point by virtue of Kimzey’s highest average score coming into the final round, Kimzey would win the bull riding whether he stayed on this last bull or not. By riding two he continued to mass points for his lead in the World Standings race, but according to Hedeman the battle taking place on the left hand delivery side of the chutes was not about points…or money.

“Sage Kimzey is always up for a challenge, he’s a realist and he would have had a chance to win the event on another bull, but he knew he would win if he rode that bull,” said Hedeman.

This was Kimzey’s third time on Big Lew. The two were even with one ride and one buck off, but the buck off was two weeks ago and still fresh on Kimzey’s mind.

In what most thought was a buck off at four seconds, Kimzey made a big move back towards center that would save the ride and even though Big Lew never quit hustling Kimzey, the champ would win the fight and be rewarded with a 91 point bull ride to win his third event tile on the 2017 Road to Cheyenne.

“This was my third time on him, but he is a very different bull now than last year in Del Rio, he is bigger, but most importantly he’s a lot stronger and he’s smarter and he never quits moving, and that’s what threw me off in Bossier,” added Kimzey still out of breath from the victory ride.

After seven years of being part of the CBR Bull Team Challenge, Dawn Collum of C &amp; M Bucking Bulls stood in front of the out gate for the first time and accepted the check for $20,000, the Hy O silver buckle, a pair of custom Fenoglio boots, and an American Hat Co., cowboy hat. C & M completed their three events this week in El Paso with the win after placing second in Rio Rancho in January.

“I am really excited, we had to win tonight to have a shot at competing in Cheyenne,” said Collum who owns the team and is partnered this year with Kelly Mitchell.

Collum cleared the field by four points with 284 total and earned the win with three qualified rides from three seasoned bulls, one from her ranch and two from fellow New Mexico stock contractor and former World Champion bull rider Owen Washburn. Flanking Washburn two bulls was Washburn’s son Braiden who is in college in nearby Los Cruces. In second place with 280.54 points was K &  G and Barrett bull team.

Team Penny and Dalton turned in the rankest score of the night with 138 Stanly Hart who earned 91 points as he bucked off Francisco Garcia in the semifinal round which earned him Bull of the Event honors. Champion Bull, the highest marked ride of the bull team challenge, went to 3381 Wet Willy from the third place team of Barker and Barnett. Wet Wily and Askey teamed up for 91.5 points to win round one.

With the top four ranked riders finishing in their World Standings order, the top five did not budge except in total points. Kimzey increased his World Standings lead by one bull score and he now sits at the top with 1,952 points. Behind him by 623 points is Eli Vastbinder with 1,329.5 points. Eighteen year old and rookie bull rider Boudreaux Campbell remains in third place with 1059 points and Jeff Askey holds steady in fourth place with 808.

Rounding out the top five is Tyler Taylor who won last week’s event in Bossier.

There are twenty rounds of bull riding left on the 2017 Road to Cheyenne schedule including the five rounds of the CBR’s World Finals at Cheyenne Frontier Days in July. CBR resumes action next week in Lufkin at the Big Tex Agriplex 2017 Lufkin Bull Bash presented by Gravely Mowers.

Round by Round scoring available. 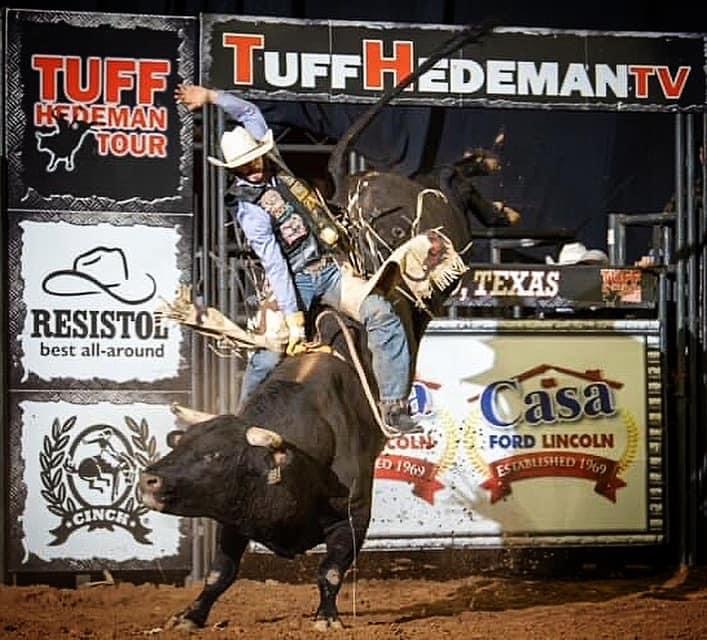