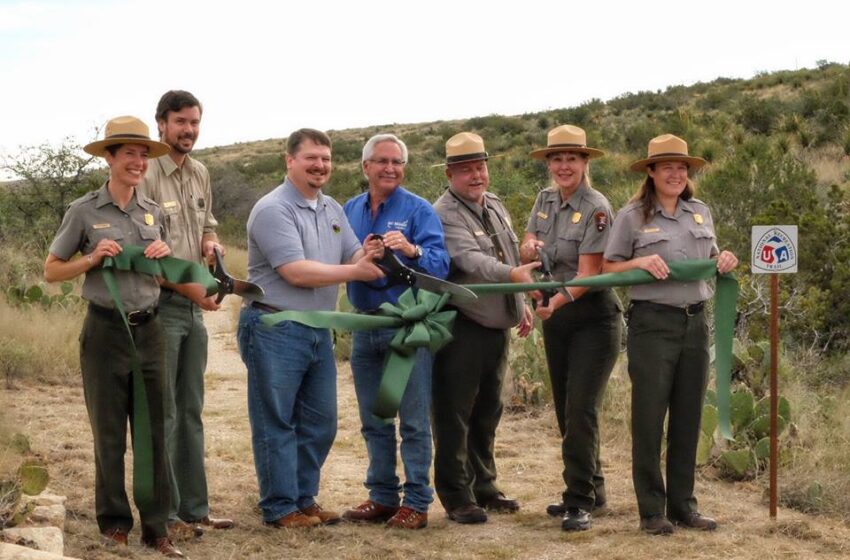 CARLSBAD, New Mexico –  Hikers now have a two-state, 100-mile option for adventure as the National Park Service held a ribbon-cutting ceremony for the Guadalupe Ridge Trail over the weekend.

The trail can be accessed on either the Texas or New Mexico side, starting in Guadalupe Mountains National Park or at White’s City, near the entrance to the Carlsbad Caverns National Park.

The trail takes hikers over the rocky peaks of the highest point in Texas – Guadalupe Peak at 8751 feet – and then route snakes its’ way through the varied landscapes Chihuahuan Desert and the Lincoln National Forest.

Officials add that an “optional loop includes Last Chance Canyon and the desert oasis of Sitting Bull Falls. The trail then crosses Carlsbad Caverns National Park and Bureau of Land Management property, with stunning views of the rugged Guadalupe Ridge.”

According to Bill Schneider, via Trails.com, the trail is unlike any within the National Parks System.

“The Guadalupe Ridge Trail is the center stage of the Carlsbad Caverns trail system. From this trail, you can see most of the park, and get a great feeling for the expansiveness and beauty of Carlsbad Caverns above the surface. You can also hike parts of the ridge trail on the Rattlesnake Canyon Loop and the Slaughter Canyon Loop.

Since the Guadalupe Ridge Trail is a mostly abandoned jeep road, the NPS allows mountain biking. However, mountain biking off this trail is strictly prohibited, either cross-country or on connecting trails down Rattlesnake or Slaughter canyons.”

The official designation was announced back in June of 2018, coinciding with National Trails Day on June 2nd.

There are over 1,000 National Recreation Trails in all 50 states.