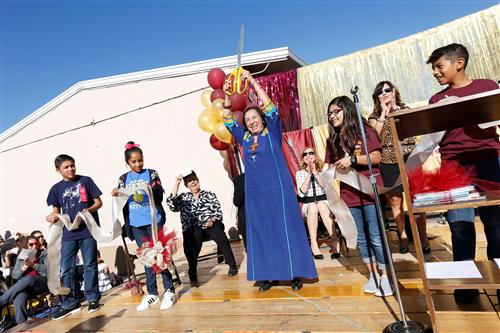 The excitement in the air was palpable as students, teachers and parents filled the brightly decorated playground of Rosa Guerrero Elementary School to celebrate the 25thanniversary of the West Side school.

But all attention was centered on one special guest.

“Are you excited for Mrs. Guerrero to come?” first-grader Marlee Arrieta asked excitedly as she and her friends sat on the blacktop before the start of the ceremony.

El Paso icon Rosa Guerrero, a world-renowned educator and dancer, was on campus, ready to celebrate the silver anniversary of the school that bears her name.

“I’m so happy to be here to celebrate the 25th anniversary of this wonderful school,” Guerrero told the students.

“I won’t be here for the 50th anniversary,” she joked. “But I’m alive now, and I am here now to encourage the students to move forward.”

Guerrero is an integral part of the school, and she makes frequent visits each year to help teachers and administrators deliver the innovative academic and extra-curricular programs for which the campus has become known.

“This is your casa,” Carrasco said. “And we are always happy to see you around.”

Superintendent Juan Cabrera acknowledged Guerrero’s legacy as he welcomed the students to the ceremony on Wednesday. He said she was one of the first people he met when he arrived in El Paso four years ago.

“Her warmth and enthusiasm are contagious and her love for El Paso is second to none,” Cabrera said. “We are lucky to have her be a part of EPISD and of this District. You will one day be able to say that you met Rosa Guerrero here today.”

The ceremony was a celebration of the work that has been done by the generations of students and teachers at Guerrero Elementary over the last 25 years. Former students spoke about the way the school prepared them for college, and long-time employees were singled out for their commitment to the community.

“Great teachers stay in great schools, and we have a lot of teachers that have been here from the beginning,” said Jill Crossley, the Principal at Guerrero Elementary. “We have built a legacy of excellence over the last 25 years, and I hope that we will be able to build on over the next 25 years.”

Students from the Folklorico club performed a special routine for Guerrero, who founded the International Folklorico Dance Group.

Guerrero has always been an advocate for the fine arts both at the district when she was an administrator, and as a namesake at the school. This is something the administration at the school sees and respects.

Guerrero spoke to the kids about the importance of the border culture and inclusion.

“We all form the tapestry of life, we’re all beautiful,” she said. “Whether you’re vanilla, chocolate, strawberry, butter pecan, or rocky road.”

Guerrero also was on campus for a ribbon cutting ceremony unveiling the school’s new blacktop as part of a PBIS enhancement grant.

EPISD plans for the program to promote Positive Playgrounds, instilling three core values in the students as they play— respect, safety, and responsibility.

The new blacktop features painted games that many parents may be familiar with from their own childhoods, like connect four and hopscotch.

As people spoke about Guerrero, they constantly referred to her as an icon. When she took the stage, she humbly corrected everyone.

“I am not an icon,” said Guerrero. “I am just another person.”