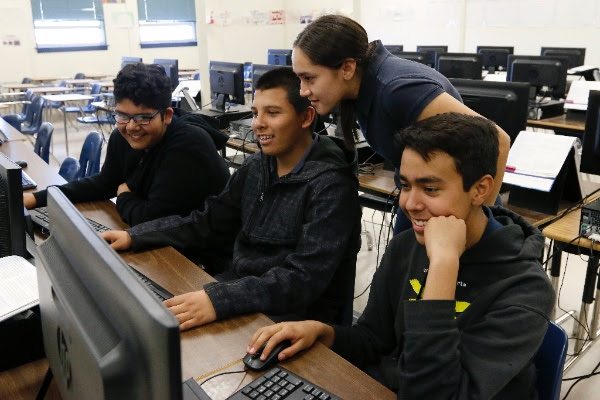 The eighth graders competed against sixth- through eighth-grade students at four other area schools including Morehead Middle School. They advance to compete against teams from throughout Texas, Arkansas and Oklahoma.

“Biz Kid$ prepares students for the real world – what it’s like to start a company from scratch,” said Guillen teacher Adrian Sanchez and Biz Kid$ sponsor. “It gives them exposure to creating a business plan, a marketing plan and dealing with customers –actually creating a budget and a profit and loss statement.”

The students developed the Teens Fixing Screens business to service Guillen’s students, faculty and staff with cracked iPhones. They would conduct business once a week.

“We saw a demand at our schools considering a lot of people have iPhones and a lot of people crack their screens within the first weeks they get it,” said eighth grader Craven Chairez. “This taught me a lot of technology skills.”

The project also sharpened the students’ skills in Microsoft Office Suite and math.

“They had to figure out the cost of their different products and how much profit they would make on each service,” Sanchez said. “It made me so proud to be their teacher because I gave them the ball and they took off running with it. They created everything from scratch and worked really well with each other.”

Proceeds from the service will go directly back to the school to benefit Guillen students.

“The profits will be used to buy uniforms for students that can’t afford uniforms,” said Jesus Aguayo. “Since we live in an area with low income, we thought that would be a need at our campus.”

The students are fully prepared to get their start-up up and running for their community.

“It started as a competition but everything they proposed is reality and they can actually do it,” Sanchez said. “They even came up with a plan for the seventh graders to continue the business.”

The Biz Kid$ project grew out of the Sanchez’s gaming club, an after school activity for four of the teammates. They approached Evelyn Sanchez, originally considered one of their academic rivals, knowing her skills would benefit their business.

“At first, I didn’t have an idea what I was getting into,” said Evelyn, who worked on design elements and led the marketing efforts. “For us, we came together to create this mixture. We all became friends and this blossomed into something beautiful.”

Biz Kid$, sponsored nationally by the Cornerstone Credit Union Foundation, is supported locally by FirstLight Federal Credit Union. The financial institute offered guidance to the campuses participating in the competition.

“What most impressed me about the Guillen Biz Kid$ was how well prepared they were and how well they worked together as a team,” said Adrian Duran, FirstLight’s vice president, Community Service and Outreach. “They were able to do a couple of extra things like creating an actual website that the other schools did not do and they were ready to launch their business as well.”