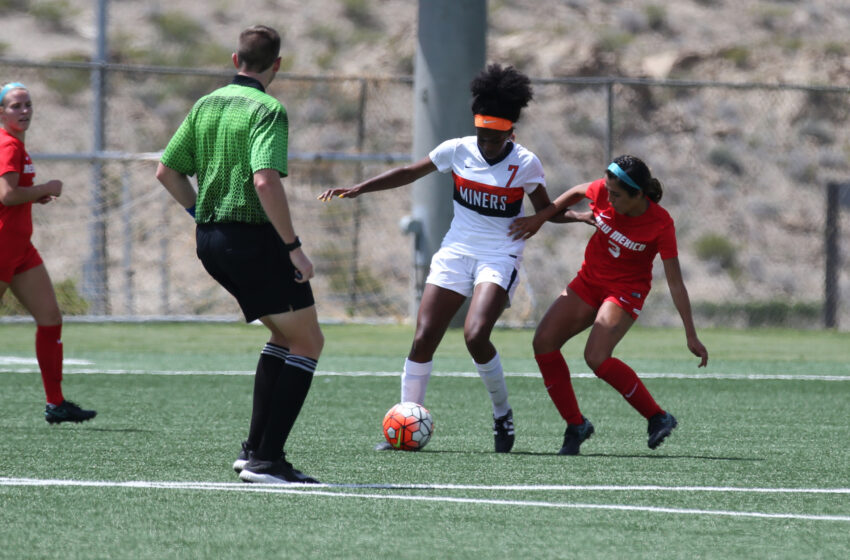 The UTEP soccer team will launch its 23rd season at home against Lubbock Christian at 7 p.m. MT on Friday. The Miners will then travel to play against Abilene Christian at 6 p.m. on Sunday.

Friday’s game will be “Camper Reunion” game, with Miner soccer academy members getting in free. There will also be posters given away, along with schedule cards.

“We are really looking forward to this game,” UTEP head coach Kevin Cross said. “We want to start off our season well. We know Alex and Lauren Denning, the Lubbock Christian coaches, and they always have an excellent team that is very well coached and highly motivated to play. We urge all of the UTEP soccer community to come out and cheer us on in the home opener, and start the 2018 UTEP athletic department season. We are also looking forward to seeing our 2018 UTEP soccer campers at the game as they get free admission for UTEP Soccer Camper Reunion Day.

“We have a very tough game playing away at Abilene Christian as we always have a battle when playing them. Most of our games versus them have gone to over time and been highly contested. They have a very good program. Abilene Christian beat us last year in over time in El Paso and they are always one of the hardest working teams on our schedule. Abilene Christian is very well coached, have some players that are difference makers and they never quit working. We will have to bring our highest energy level and not take a play off in order to secure a hard-fought road result. We are looking forward to the challenge.”

The Miners will face off against the Lady Chaps from the Heartland Conference for the first time in program history.

UTEP and Abilene Christian are matching up for the sixth consecutive year. The Miners are 2-1-2 vs. the Wildcats but each of the contests has been extremely competitive with every game being decided one goal or less. Last year saw ACU capture its first win against the Miners with a 2-1 result at University Field.

NCAA Division II member Lubbock Christian forged a record of 9-7-2 last season, including a readout of 6-6-2 in Heartland Conference action. LCU brings back four starters from that squad. The Lady Chaps also have 12 newcomers in the mix.

Abilene Christian posted a record of 8-10-2 in 2017, including a 6-5 mark in the Southland Conference. The Wildcats were projected to finish third in the 2018 SLC preseason poll and had four individuals (Christina Arteaga, Shay Johnson, Michelle Mulrooney and Dylan Owens) tabbed to the preseason All-Southland conference team. Overall 20 letter winners return for ACU.

UTEP is in its 23rd season as a program, boasting an all-time record of 247-167-30. The Miners are under the direction of 18th-year head coach Kevin Cross, who sports a mark of 205-119-23 in that time frame. He is assisted by two former Miners (Heather Clark and Jessie Pettit).

UTEP’s roster of 23 for 2018 has a unique blend with 12 native Texans, seven individuals hailing from Canada and a quarter that call Arizona home.

In 2017 20 of the 27 members of the squad were underclassmen, so it’s only natural that this year’s squad has a bit more experience. In 2018 the Orange and Blue will feature a unit where 14 of the 23 individuals are either freshmen (seven) or sophomores (seven). There are four juniors and five seniors who will be able to provide leadership for the still relatively young group.

Diving Deeper Into The Roster

UTEP has 18 returning letter winners compared to just six letter winners lost-in addition to three individuals who sat out last season as a redshirt back in the fold for 2018. The Miners have eight starters back as well, giving head coach Kevin Cross a solid foundation to work with this year.

UTEP returns quite a bit of its talent from a year ago. The Miners have their top-three goal scorers (Vic Bohdan – six, Anna Jimmerson – six and Lauren Crenshaw – three) back in the mix. Overall the Orange and Blue return players responsible for 21 of the 27 goals scored last season.

In 2017 Vic Bohdan and Anna Jimmerson paced the Miners in goals with six. It marked the first time at the school since 2004 that the top two goal scoring spots were occupied by freshmen. That year Jami Tullius and Cara Nordin each racked up 10 goals.

UTEP brings back a pair of 2017 All-Conference USA performers in the form of sophomore forward Vic Bohdan (second team) and junior defender Lauren Crenshaw (third team). It marks the first occasion since 2015 that the Orange and Blue will have returned multiple all-league honorees.

The Miners also return senior GK Alyssa Palacios, who was a 2016 All C-USA third-team selection.

Senior GK Alyssa Palacios has compiled some staggering numbers during her first three seasons in the Sun City. The result has been her stamping her name throughout the UTEP career record book. She enters her final season in the Sun City currently second for saves (342), saves per game (5.80) and save percentage (.838), third in shutouts (18), GK games started (59) and GK minutes played (5,413) while placing fourth in GK matches played (59) and fifth for goals against average (1.10).