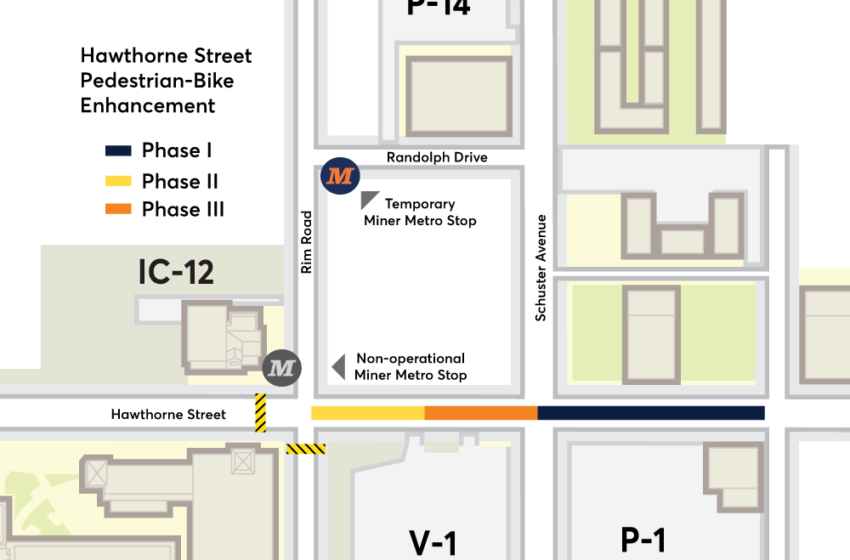 Contractors will start the last phase of the planned Hawthorne Street Pedestrian-Bike Enhancement Project during the weekend of Jan. 21, 2017.

The work, which should be finished around the end of February 2017 (weather permitting), will necessitate the temporary move of the Miner Metro Shuttle stop to the southwest corner of Rim and Randolph Drive from Rim and Hawthorne for the remainder of the project. Parking officials will set up signs to alert shuttle users of the change.

The work along Hawthorne will involve some demolition and reconstruction. Detour signs will help drivers and pedestrians navigate around the construction zone. Drivers are encouraged to slow down in the area or avoid it if possible.

The enhancement project, which stretches from Rim to Crosby Avenue, began in early October 2016. When finished, Hawthorne will have one lane in each direction that will be marked for co-use with bicyclists. There will be no center lane.

The goal is to make this campus entrance safer, more efficient and aesthetically pleasing. The road will continue the look of Hawthorne on campus. It will feature wide sidewalks with ADA-approved ramps, native and drought-resistant trees, shrubs and flowering plants with an irrigation system, and additional lighting. The V-1 lot will have one wide driveway.

On a related note, the City of El Paso has made the stretch of Hawthorne from Schuster to Crosby a “No Parking” area on the west (P-1 parking lot) side of the street and no parking from 7 a.m. to 6 p.m. weekdays on the east side of the street. The University has set up warning signs on A-frames to alert motorists about this change.