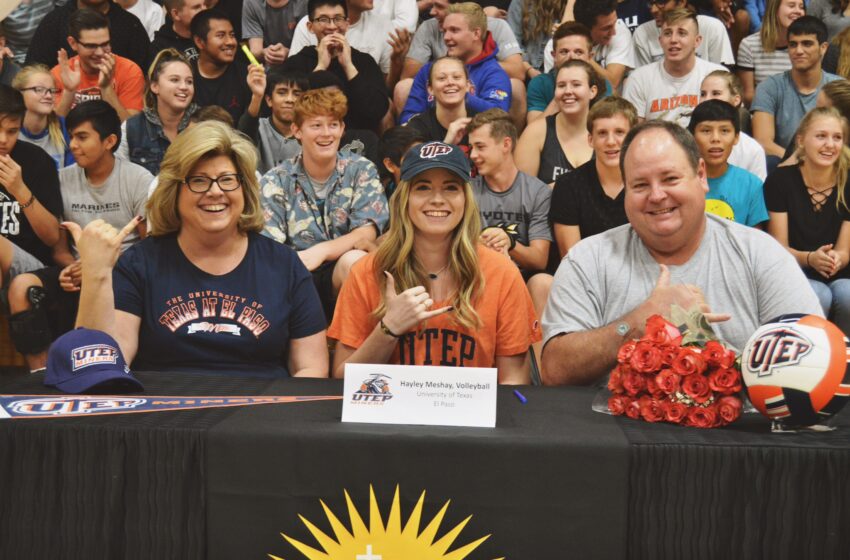 Meshay hails from Phoenix, Ariz. and will add depth to the Miners’ setter position and right side. The 5-foot-11 decorated athlete has played club volleyball for six years, going to nationals for five years in a row, and has racked up Division 2 Metro West Player of the Year and First Team honors.

She was also named to the Under Armour All-America watch list. During her senior year at Arizona Lutheran Academy, she notched 508 kills at a .326 clip, 85 service aces, 162 digs and 64 assists.

“Hayley will give us some needed depth, but is also a spark with a strong, fast arm,” Watts said.

Meshay will be the first collegiate athlete in her family, but her academic success is to be noted as well. She is a member of the National Honors Society, a student ambassador as well as an AIA Scholar Athlete.

She chose UTEP because it offers the degree she wants, it’s not far from her Arizona home and she said she enjoyed the campus.

“I know from our first meeting and talking with the coaching staff, that they have the same passion for the game as I do,” Meshay said. “The girls on the team are amazing and I cannot wait to be a part of this team. The campus is beautiful and the facilities are amazing. The historic Memorial Gym, the Sun Bowl and the MAAC center all are very impressive.  Being on campus just feel like home.  El Paso is a ‘large city’ but with a small town feel and knowing that the community supports UTEP and UTEP supports the community is a big deal.  Lastly, the weather is very similar to my home city of Phoenix.”