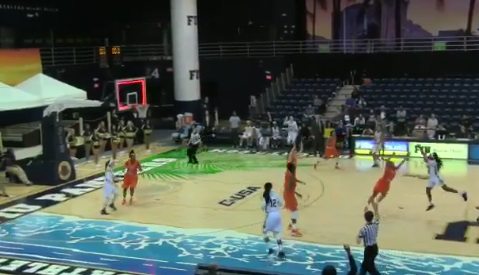 MIAMI, Fla.- Senior Sparkle Taylor drilled a jumper with about three seconds remaining in triple overtime to put UTEP up, 87-85, but FIU’s Kristian Hudson’s desperation heave from about 35 feet went as time expired to sink the Miners, 88-87, in the first 3OT game in program history at Lime Court at FIU Arena Thursday evening.

“We looked like we were in the driver’s seat at the end but they hit the big shot,” UTEP head coach Keitha Adams said. “I feel really bad for the team because they played really hard. We just have to hang in there and stick together. It was a great game and a crazy one. A lot of things can happen out there. I’m proud of our players.”

The home side had other ideas, tallying back-to-back scores to get within one. McKinney split two free throws with 11 seconds left only to have FIU get a lay-up from Janka Hegedus (10 points) to send it to OT. The Panthers carried that momentum into the first extra session, with Tianah Alvarado (21 points) nailing a triple to put her side up, 65-62.

McKinney (two free throws) and a Seda lay-up reinstated the Miners’ lead (66-65) but Alexis Gordon (15 points) nailed a trey. After UTEP misfired at the other end, Hudson was fouled. She split the pair to put the Miners down three again (69-66) before Howell took over. The sophomore splashed home a step-back triple to beat the shot clock before converting on a lay-up off a steal. FIU tied it with free throws from Hudson. The Miners pulled ahead by two twice, but both times FIU had an answer, to force double OT.

In the second OT FIU raced out to a four-point lead (79-75), its largest advantage of the tilt, before the Miners scored the next four points at the free-throw line. Defense dominated the rest of the stanza, sending the game to a third-and as it turned out-final OT.

UTEP struck first thanks to Taylor before a Gordon triple. Jumpers by Taylor and Howell put the Miners up three (85-82) but Gordon came through again with a clutch trey. The score remained tied, 85-85, until Taylor’s shot silenced the crowd. Unfortunately for the Orange and Blue faithful it was short-lived, with Hudson somehow managing to sink the game-winning triple.

UTEP will wrap up its stay in the “Sunshine State,” by playing at Florida Atlantic 3 p.m. MST/5 p.m. EST Saturday. Tim Hagerty will have the call on 600 ESPN El Paso.