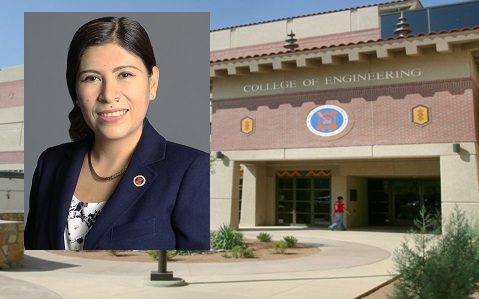 Theresa A. Maldonado, Ph.D., dean of UTEP’s College of Engineering, has appointed Heidi A. Taboada, Ph.D., as the associate dean for research and graduate studies.

Taboada joined The University of Texas at El Paso in 2007.  She is currently an associate professor in the Department of Industrial, Manufacturing and Systems Engineering. She holds Ph.D. and M.S. degrees in industrial and systems engineering from Rutgers, The State University of New Jersey.

Taboada has expanded her research interests to include innovations in engineering education. She is particularly interested in research related to increasing the participation of minorities and women in engineering. She strongly believes that meaningful experiential learning experiences transform students’ lives.

Furthermore, her international work includes the development of and participation in different faculty-led study abroad programs in Latin America through funding received by the U.S. Department of State and the 100K Strong in the Americas Initiative.

“Dr. Taboada has demonstrated routinely the power of interdisciplinary collaborations toward achieving research outcomes that impact society,” Maldonado said. “She will be a tremendous addition to the Dean of Engineering Office, serving the college faculty and students.”

She has published more than 50 refereed manuscripts in technical journals, book chapters and conference proceedings. Her work has been published in IEEE Transactions on Reliability, Reliability Engineering and System Safety, IISE Transactions, and Quality Technology and Quantitative Management, among others.