A cheating scheme to manipulate student grades in an effort to rig the federal accountability system through standardized tests at the El Paso Independent School District continues to unravel more than 5 years after the arrest of Lorenzo Garcia, the former superintendent.

Then on the following Tuesday, former Austin High School assistant principal, James Anderson was arrested after he surrendered to federal agents.

Anderson was booked into the El Paso County Jail on Monday and remains in detained as of Wednesday.

Anderson was the only alleged co-conspirator that was not allowed release on bond.

Anderson, a former Assistant Superintendent of Secondary Schools Division, is the sixth former EPISD administrator indicted this week for his involvement in a cheating scheme that led the manipulation of grades to keep the district in compliance of No Child Left Behind.

According to the FBI, five other former EPISD administrators were arrested in their involvement on April 27 for their roles in the scheme.

All five were arrested on bond; and all plead not guilty.

On Monday, Murphy, Tegmeyer, Love, Thomas and Tanner were scheduled to appear for their arraignment in Judge Torres U.S. Federal Courtroom. But all five elected to waive their appearance. Other co-conspirators were also included in the indictment but were not named.

Almonte, the prosecuting attorney for this case; and James Darnell, defense attorney for Tanner did not want to comment further on the case or the arraignment hearing. But said the next step is a Docket Call, scheduled for 9:30 a.m., on May 26.

Both have been placed on paid leave by their respective districts, pending the ongoing investigation according to district officials.

Clint ISD released a statement to the El Paso Herald-Post on Monday:

“On April 22, 2016, the Clint Independent School District (“District”) became aware that current District Administrator, Mark Tegmeyer, was indicted. The specifics of Mr. Tegmeyer’s indictment are unknown to the District at this time.  However, the District can confirm that none of the alleged actions given rise to Mr. Tegmeyer’s indictment occurred while he has been employed by the District. If the District needs to cooperate with any criminal investigation, any and all information requested will be provided to the law enforcement authorities.  At this time, Mr. Tegmeyer has been placed on administrative leave with pay pending the disposition of the criminal charges against him. Mr. Tegmeyer was placed on Administrative leave on Monday, April 25th.”

According to the indictment, during the end of the 2005-2006 school year the district’s Superintendent, Lorenzo Garcia, created a Priority Schools Division, “to address the needs at 15 EPISD campuses which were either academically unacceptable or did not meet AYP for two consecutive years, and at an additional seven campuses which were labeled borderline by NCLB ‘accountability,’ standards and needed serious intervention.”

The No Child Left Behind Act, as stated in the indictment, was enacted in 2001 in an push to ensure all students had an equal opportunity to be proficient in their academic achievement.

Federal funds are tied to the NCLB, and schools with students who were considered disadvantaged – or to come from low-income families, were provided with federal funding to assist them in achieving certain academic goals and standards.

In order to measure each schools and students progress an Adequate Yearly Progress was checked based on reading/language arts, math, attendance and graduation rates.

While the indictment does not state which schools were labeled as Priority Schools – an investigative report by Weaver and Tidwell, an Austin-based forensic accounting firm, refer to Austin, Irvin, Bowie, El Paso and Burges High Schools.

The investigation by Weaver and Tidwell was conducted in 2012 after the Texas Education Agency ordered the district to conduct an investigation. The Weaver Audit was released in April 2013.

Schools were regularly tested through a standardized test, and from 2007 to 2011, the Texas Assessment of Knowledge and Skills test, was the standardized test students in the 10th grade were required to take to evaluate their progress in reading, writing, social studies, math and science.

The Department of Education also takes into account students that are labeled as “subgroups” or students that were “special needs, Limited English Proficient, Special Education, economically disadvantaged; Hispanic and African-American.

If 50 or more students at each campus were classified in these subgroups, the district is required to report them for accountability purposes. However, if a subgroup at a campus fell below 50 students, then that subgroup is not taken into account and the campus has a greater chance of meeting federal accountability standards through the standardized test.

In a scheme to meet AYP standards, district administrators finagled the data and created a policy that retained transfer students from Mexico and other countries in the 9th grade, despite the number of credits they had on their transcript. At the completion of the school year, students that had been detained in the ninth grade were then skipped the 11th grade – thereby avoiding the standardized test.

Murphy implemented, what was known as the EPISD strategy of withholding credits, in July 2008, according to the indictment.

In addition, the indictment states that Murphy “repeatedly gave high school principals marching orders to put up barriers to prevent students in the LEP (Limited English Proficient) subgroup from going onto the tenth grade.”

Murphy along with another unnamed co-conspirator, told administrators to withhold any information from parents regarding their child’s retained progress in the ninth grade.

“When speaking with parents, please do not tell them that if their students pass fall semester classes, they can petition to move to 10th grade at Christmas. This is against policy – they will remain 9th graders through May 2009 regardless of credit performance during this school year…”

Students in the targeted subgroups that were skipped to the 11th grade after completing their retained year in the 9th grade were rewarded the credits through “credit recovery” methods on record. Credit recovery methods included the creation of “mini-mesters.”

Tanner’s role in the scheme, according to the indictment, indicates that he directed an Austin High School administer to change attendance records of students who had been marked absent so that it marked them as present.

During the 2009-2010 school year – Tanner, along with Mark Tegmeyer interviewed students who had been marked absent by their teacher in an effort to change their attendance records.

The fraudulent entries continued through 2012 according to the indictment: From July 25, 2011 through July 28, 2011 Tanner approved 636 credit recovery forms; thereby restoring credits lost by those students. In June 2012, Tanner removed 418 “no credit” codes from the records of students at Austin High School to restore credits that counted for graduation.

Tegmeyer assisted Tanner in the Spring of 2010 and Fall of 2011 by instructing an Austin High School employee to drop students without the parents’ knowledge or consent.

Throughout the scheme it would be unjust to say that employees of Austin High School did not speak up. On the contrary, according to the indictment on Aug. 28, 2012 two unnamed teachers provided information to the FBI.

As a result – Diane Thomas instructed employees to “fudge” student attendance numbers in certain courses to make it appear as if there was zero projected student enrollment in classes taught by these two teachers. The order was given in January 2013, the indictment states.

Further retaliation came from Tanner who directed counselors to remove students from one of the instructor’s courses because a needs assessment indicated, “positions at Austin high School had to be cut.”

Tegmeyer instructed the graduate to press criminal charges against the teacher concerning an incident that occurred in 2011.

Love and Tegmeyer had coached the student to lie to EPISD police regarding his previous declination of charges against the instructor, the indictment states.

Garcia was hired by the district in December 2005, but he did not begin his leadership at the district until February of 2006. Shortly after taking the helm, he sought to raise the scores of the district through this etched scheme.

Garcia was arrested by the FBI and charged in August 2011 for steering a $450,000 no-bid contract to his mistress and inflating student grade scores in an effort to cheat federal accountability measures.

In November 2011, Garcia resigns as superintendent from the district.

Garcia’s arrest, resignation and revelation of the scheme caused mistrust within the community, the district and the Texas Education Agency to question members of the school board; and Commissioner of Education, Michael Williams, appointed a state monitor, Judy Castleberry, to oversee the actions of the board as the investigation continued in 2012.

Later, that same year Williams strips the board of their power and promotes Castleberry to the role of state conservator.

Garcia was initially sentenced to 3 ½ years in a federal prison after he plead guilty to two counts of fraud. But his sentence was shorted to 2 ½ years after he participated in a drug counseling program.

It is important to note: Through the work of former Senator Eliot Shapleigh, D-El Paso, administrators, teachers students who came forward, and former El Paso Times reporter Zahira Torres and colleagues, the scheme was investigated and reported to the public. In 2012 the El Paso Times was able to obtain documents regarding the scheme through the Texas Public Information Act.

The El Paso Times led the coverage of the scheme as it continued to unravel throughout the years and – as reported by the El Paso Times – findings at the Ysleta, San Elizario, Canutillo, and Socorro Independent School Districts indicated that similar grade retention and grade skipping practices were enacted; or anomalies in student data was found as well after each of these districts had conducted their own external and/or internal audits.

While Garcia has already served his time, and released in October 2014, the charges in the indictment and the Weaver Audit indicate that the scheme he enacted during his reign at the district remained in practice through 2013.

Other arrests in the EPISD scheme, according to El Paso Times archives include Myrna Gamboa, former director in EPISD’s Priority Schools Division; and Terri Jordan, former interim superintendent at EPISD who took leadership of the district after Garcia resigned.

Could Face up to:

* 5 years in federal prison upon conviction of conspiracy to defraud the Government.

* 20 years in federal prison upon conviction of conspiracy to commit mail fraud.

* 20 years in federal prison upon conviction of conspiracy to commit mail fraud;

* 20 years in federal prison upon conviction of mail fraud;

* 5 years in federal prison for making a false statement to a federal agent. 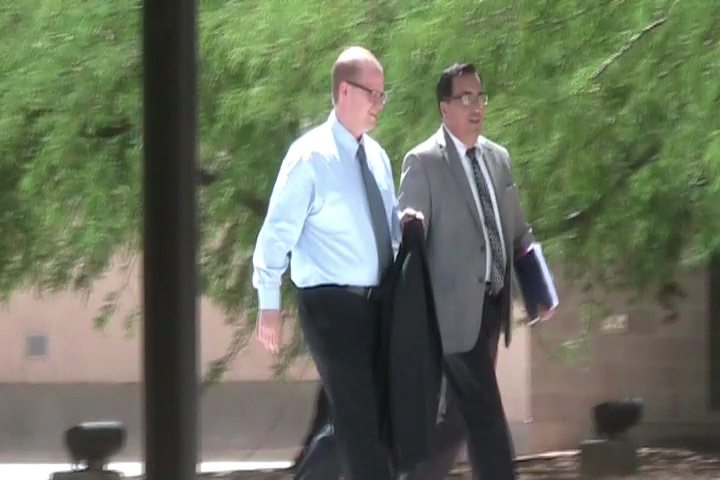