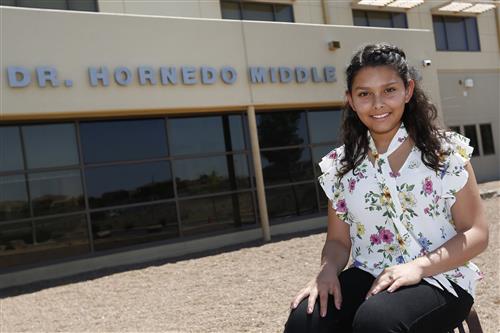 Anakaren Garcia’s dream of studying genetics in college will not have to wait until she graduates high school in 2022.

The Hornedo Middle School eighth-grader will get a chance to start her journey into the medical field as an official delegate to the Congress of Future Medical Leaders on June 25-27 in Lowell, Massachusetts.

“I was very happy when I received the letter,” Garcia said. “I told my parents right away, and they told me that I should be thankful for this great opportunity. I am excited to learn more genetics and how to accomplish my dream.”

Principal Micaela Varela is proud of Garcia, whom she described is an exemplary student and a leader.

“It’s a huge honor for her and recognition for Hornedo. We are excited for this opportunity,” she said. “She has a bright future. I think it’s an experience she will be able to share with her peers and inspire others to pursue their goals.”

Garcia was nominated by Dr. Mario Capecchi, winner of the Nobel Prize in Medicine and the Science Director of the National Academy of Future Physicians and Medical Scientists.

She was selected for her academic achievement, leadership potential and determination to serve humanity in the field of medicine.

“I am excited to meet Dr. Capecchi because he is doing what I want to do,” she said. “I think it’s so cool that the body is made up of cells and that each one has the same genetic information.”

During the three-day event she will network with students from across the country and hear presentations from Nobel Laureates and National Medal of Science winners. She also will meet with Ivy League and top medical school deans to learn more about what is expected in medical school.

Garcia credits her mom for her interest in genetics and EPISD’s Developing Research and Early Aspirations Medical Scholars program, also known as DREAMS, for helping cement her pursuit in a genetics career.

“The more I learned about genetics, the more I liked it. My mom is the one who taught me about genetics when I was in third grade and had to write about what I wanted to when I grew up,” she said. “During the forensics portion of the camp, we found a strand of hair in the mock crime scene. We viewed it under a microscope and see if it matched with any of the suspects.

Richard Rossi, executive director of the National Academy of Future Physicians and Medical Scientists, hopes to engage the future of medicine as early as possible.

“This is a crucial time in America when we need more doctors and medical scientists who are even better prepared for a future that is changing exponentially,” Rossi said in a press release. “Focused, bright and determined students like Anakaren Garcia are our future, and she deserves all the mentoring and guidance we can give her.”