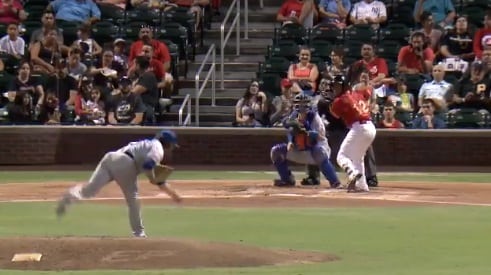 The El Paso Chihuahuas took the field an hour late due to a rain delay, but not even the downpour could cool off the fiery Dogs in their 4-3 win over the Las Vegas 51s on Saturday.

The victory was also the Chihuahuas 12th consecutive home win, a franchise record.

El Paso’s win and the Salt Lake Bees’ loss on Saturday gave the Dogs a comfortable seven-game lead in the PCL Pacific Southern Division, with 15 games left in the regular season. The Bees lost to the Reno Aces in a late-innings come-from-behind 9-5 win.

The 51s started early against El Paso starter Cal Quantrill (3.18 ERA) who had thrown 51 pitches by the end of the second inning. Quantrill gave up a two-run bomb to 51s outfielder Bryce Brentz in the first inning to start the scoring, Las Vegas 2-0.

The tenacious Chihuahuas responded quickly in their half of the first though, against 51s lefty P.J. Conlon. Top prospect Luis Urias (.290 BA) earned a walk before catcher Francisco Mejia (.316 BA) – another top prospect – came up to the plate and slammed a towering fly ball along the left field line that danced side-to-side and eventually landed on the right side of the foul pole on the Peter Piper Pizza Porch. El Paso tied it up, 2-2.

The Chihuahuas continued beating up on the 51s pitching in the third inning. Urias hit a full-swing slow roller to third base and sped his way to first base without a throw. That hit gave Urias an 8-game hitting streak.

Unfortunately for the Chihuahuas, they lost a run in the third on what appeared to be a bad call by the home plate umpire. Center fielder Dusty Coleman came up with two runners on base and two outs. Coleman nailed a grounder to left field as Allen Craig raced home from second base. Las Vegas left fielder Zach Borenstein launched the ball to home plate and got it there just after Craig slid on the plate.

The replay appeared to show that the tag was late and the home crowd of 9,585 began to boo.

Quantrill was the winning pitcher of record in the fifth inning when Las Vegas catcher Jose Lobaton (.363 BA) made contact with a fastball that landed somewhere on the third floor of the Dog House in right field. The game was tied, 3-3.

The hot-hitting Dogs came back in the seventh and, you guessed it, Urias leads off the inning with a triple off the Peter Piper Pizza Porch. Urias jogged home to score the final run of the game on a France single to right field, El Paso 4-3. Bad call or not, the Chihuahuas pulled it off.

All three of the Chihuahuas relievers deserve credit for the win, pitching four scoreless innings, but the win went to Carter Capps (1-0) and the loss went to Eric Hanhold (1-2). The save went to Rowan Wick, his 7th of the season.