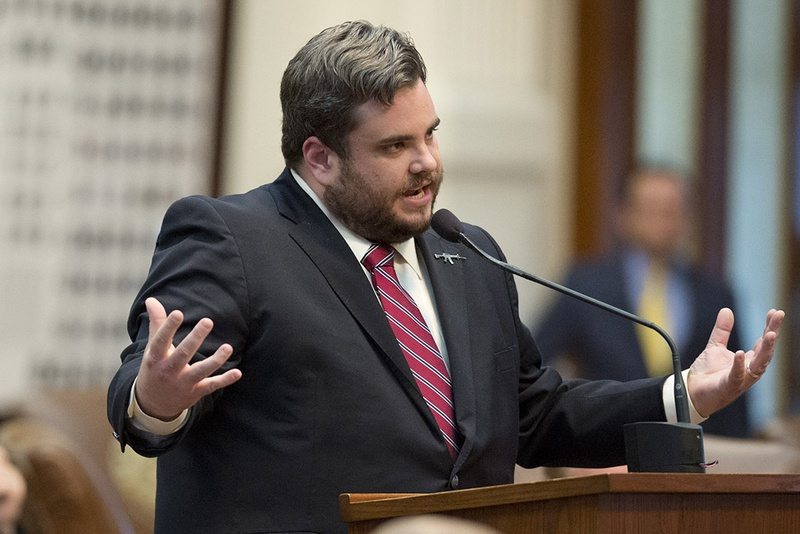 Two measures that would make it easier for Texans to access guns were up for consideration by the House Homeland Security and Public Safety Committee on Tuesday.

House Bill 375 by state Rep. Jonathan Stickland, R-Bedford, would allow Texans to openly carry a handgun with or without a license, making it optional for people in the state to obtain a permit or take a class. Stickland filed the same bill in 2015, but it was never heard in committee.

“I don’t think the government has the right to say, ‘You have a Second Amendment right, but only if you take this class and pay this fee,’” Stickland said as he laid out his bill. “If someone can legally possess a firearm, they should be able to carry that firearm.”

More than 300 people signed up to testify on the bill, including several law enforcement officers who took issue with a provision that would prevent them from stopping a person carrying a handgun.

“When someone calls and says, ‘Hey, there’s a mysterious person with a weapon,’ [HB 375] as written would not let us address that,” said Houston Police Lt. Jessica Anderson.

Testifying on behalf of her department, Anderson said law enforcement had a responsibility to oppose the legislation because the bill would make it harder to do an already challenging job.

“Our biggest message is that the current law is working — let’s not mess with it just yet,” Anderson said, referring to Texas recently becoming the 45th state to allow Texans to openly carry handguns in a hip or shoulder holster, provided they have a permit.

The committee’s vice chairman, state Rep. Poncho Nevárez, D-Eagle Pass, agreed with Anderson and said without a license to carry, law enforcement would not easily be able to separate criminals with guns from licensed gun owners in public.

Committee member Rep. Matt Schaefer, R-Tyler, a joint author of HB 375 and a veteran, said he had seen freedom lost “at the point of a gun” during his time in Afghanistan.

“Many times, the gun is the difference between freedom and not,” he said. “The Second Amendment was written to protect us against a tyrannical government.”

At the beginning of the hearing, proponents brought in boxes they said contained more than 70,000 signatures in support of the bill. State Rep. Phil King, R-Weatherford, chairman of the committee, commended the groups and said the boxes “made a good point.”

Some testimony touched on religious freedom. Radio host Don Green warned legislators not to “stand between me and Jesus Christ when he commands me to defend myself. Grant me my God-given rights to defend my family and my friends in any manner I can afford to do so.”

Andrea Brauer with Texas Gun Sense said it was impossible for anyone to know where God stands on HB 375. Brauer said people bringing religion into the open carry debate are “not arguing that [HB 375] is good policy — they’re just saying, ‘It’s my right and I want it now.’”

The second bill, House Bill 1911 by state Rep. James White, R-Hillister, would allow people without a license to openly carry where current license holders carry, with the exception of college campuses in the state.

In laying out his bill Tuesday, White pointed out that Texans are currently allowed to openly carry long arm rifles or keep a gun in the glovebox of their car under state law. He said HB 1911 would simplify state statute by creating a “single class of law-abiding Texans.”

The option to retain an open carry license would remain under HB 1911, White said.

According to estimates from the Legislative Budget Board, HB 375 and HB 1911 would cost the state more than $37 million each if passed into law. And while neither bill would eliminate the license-to-carry program, the board predicted applications for a license and renewal to carry would decline by 90 percent in fiscal year 2018.

HB 375 and HB 1911 don’t have companion legislation in the Senate, but state Sen. Don Huffines, R-Dallas, said in a statement March 27 he was “eagerly awaiting” the chance to sponsor “constitutional carry” legislation in the upper chamber, adding there was “no bigger or better way to advance liberty this session.”

The House committee approved additional gun-related measures Tuesday morning, including one that would allow emergency first responders to carry a handgun while on the job, and another — whose companion legislation was voted out of the Senate Monday — that would lower license to carry fees.

Both bills were left pending in committee Tuesday evening.