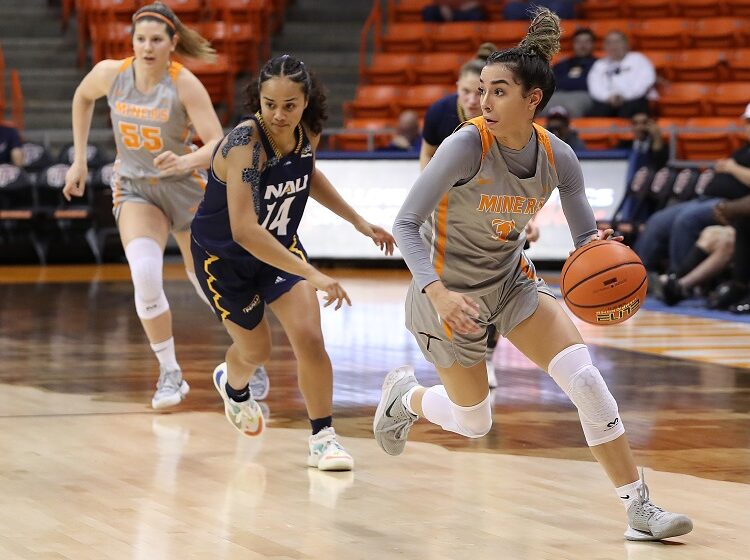 LAS CRUCES  – Katia Gallegos poured in a career-high 26 points (career-best 16-of-20 on free throws made and attempted), and the UTEP women’s basketball team (7-1) gutted out an 82-78 thrilling overtime win at I-10 rival NM State (3-5) to complete the season sweep of the Aggies Wednesday evening.

The Miners were without the services of leading scorer Destiny Thurman (16.0 ppg), who missed the game with an injury, and had two starters foul out, but they refused to fold up shop despite NM State carrying an eight-point lead heading to final quarter. Gallegos tallied six points in the final frame, including a free throw to force OT with 14 seconds left.

UTEP pulled ahead for good two minutes into overtime, and staved off the Aggies-including a blocked shot by Brenda Fontana on a potential game-tying three with less than five seconds left. There were eight ties and 10 lead changes with the Orange and Blue’s largest lead being the final score after Gallegos fittingly iced the contest at the charity stripe.

The effort improves UTEP to 7-1 on the season, marking the second time in the past three seasons that it has achieved the feat under head coach Kevin Baker. Elina Arike joined Gallegos in double figures with 16 points while Teal Battle and Eliana Cabral each netted nine points.

The Miners attacked and attacked, piling up 35 free throws made (tied fourth most in program history) on 46 attempts (seventh most in school history). They were also competitive on the glass (35-34 NM State).

“If you wonder why I didn’t call any timeouts during the game, I just felt like it was going to go down to the fourth quarter and I was going to need every one of my timeouts late,” Baker said. “This is just a great team win. You look at all the little things we did. It’s a complete team win. We knew Destiny (Thurman) wasn’t playing, so we said before the game we needed to have her back and we needed everyone to step up.”

UTEP scored first on a jumper off a curl by Avery Crouse, but NM State countered with an 11-3 run to lead by six (11-5) with 5:27 to play in the opening frame. Arike stopped the run with soft touch on a baby hook shot.

The Aggies methodically moved their lead back out to nine midways through the second quarter, but once again the Orange and Blue had an answer. It came in the form of 7-0 spurt spanning only 94 seconds.

Gallegos started with a step-back triple- her second of the game- which was followed by a stop, a score, a stop and a score to get it down to two. After yet another step, Fontana sank two free throws to pull UTEP even. It was back-and-forth the rest of the way with a late basket allowing the home side to secure a three-point cushion (42-39) over the Miners at the break.

UTEP scored the first three points of the third quarter to regain the lead at 43-42, its first advantage since a 2-0 edge following the opening possession of the contest. It was back-and-forth over the next few minutes with both sides striving to seize momentum. Petree came up with a steal to set up Gallegos in transition, affording the Miners a one-point cushion (49-48).

NM answered with a 5-0 push but two free throw tosses by Gallegos halted it. It was short-lived as the Aggies pushed their lead back out to eight (59-51). It remained an eight-point differential (61-53) heading to the final frame.

The Miners scored six of the first seven points of the fourth quarter, and just like that it was a three-point tilt (62-59). It was a two-point differential in favor of NM State (66-64) coming out of the final media timeout of the game when a reversal on the call on the court (charge changed to block) fouled out Crouse and afforded NM State a pair of free throws.

The Aggies split the pair and eventually extended the lead to five (69-64). Gallegos kept the Orange and Blue within striking distance, eventually forcing overtime with a free throw with 16 seconds to play.

It was more of the same in overtime before a lay-up by Cabral with 2:55 left put the Miners up by two. They led be three in the waning seconds, and NM State had multiple 3-point shots to tie the game on consecutive possessions not go down, including a rejection by Fontana on the latter to ice the game.

“I thought we executed so well in the fourth quarter,” Baker said. “I’m just so proud of them, mainly the resiliency. We’re going to enjoy this one. This was a tough road win, but that’s where you build your resiliency and your championship teams”