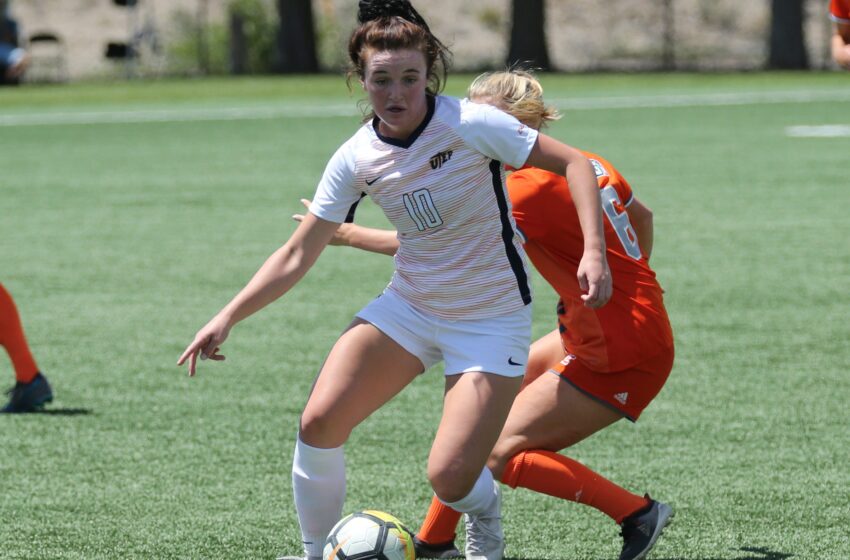 The UTEP soccer team will open its second slate of four straight home games this season, beginning on Thursday against Marshall at 7 p.m. MT and continuing vs. NM State in the FirstLight Federal Credit Union Battle of I-10 at 6 p.m. MT on Sunday.

Thursday will feature “Fiesta Night”, with kids 12 & under gettin in free and face painters for the kids. Bam bam sticks will be given out to the first 200 fans and a performance from the Mariachi Real de El Paso.

Sunday will feature a White Out promotion, fans wearing white get $2 tickets. FirstLight Federal Credit Union fans will be given out to the first 200 in attendance.

“This is a huge weekend for UTEP soccer,” UTEP head coach Kevin Cross said. “We need the El Paso soccer community and UTEP to come out and support us. We play our first Conference USA home game on Thursday night versus Marshall after starting league play with a tough road win. Marshall is a great soccer team that is always well coached. They have a great attack and a strong defense so our entire team will have to be playing well. We are looking forward to Anji Thornton’s professional mariachi band and the UTEP men’s club soccer team being in attendance on Thursday for Fiesta Night. On Sunday we play our rivalry game against a very good NM State team that fights for everything. They hustle for every ball and do not quit. Sunday should be a fun night as well as we will have the American Outlaws El Paso in attendance as well as the El Paso USL. This is a big weekend for UTEP soccer and we urge our fans to come out and support us!”

Series History vs. Marshall
UTEP has faced the Thundering Herd 11 times over the program’s history, compiling a record of 6-3-2. The last meeting came in 2017 with the Miners earning a 2-0 home victory.

Getting To Know Marshall
Marshall (2-4-2) opened league play with a 2-1, home loss to Florida Atlantic. The Thundering Herd has tallied 10 goals on the season, with sister duo Farah and Marah Abu-tayeh leading the team with three goals each.

Series History vs. NM State
The Miners look to continue their dominance over I-10 rivals NM State. UTEP leads the series 6-1. The Aggies upended the Miners for the first time in 2017 with a 2-1 victory in double overtime, breaking a six-game losing streak.

Getting To Know NM State
The Aggies are coming off a 1-0 loss against New Mexico, putting them 1-7 on the season. NM State has netted 11 goals on the season. Aileen Galicia leads the team with four goals and Alexa Barrera accounting for four assists.

Miners In Conference USA
UTEP holds an all-time conference record of 66-55-11 and was one of four teams winning its opening game (Southern Miss, UAB and Florida Atlantic). The Miners finished the non-conference schedule with a record of 4-3-1, ranking seventh overall.

Clutch Crenshaw
Lauren Crenshaw jump-started her junior season with four goals, the most in a single season in her career. The Arizona native leads the team in goals and points (nine). Three of her goals have come from the penalty spot, making her the first Miner in program history to convert three PKs in a season.

Strong Across The Board
UTEP has demonstrated that it works as a team with nine players accounting for 15 goals. Lauren Crenshaw leads with four goals, April Pate, Vic Bohdan, Jojo Ngongo and Anna Jimmerson all have netted two, while Danielle Carreon, Cayla Payne, Jackie Soto and Natalie Valentine have contributed to the offensive success.

Home Field Advantage
The Miners have been historically tough to beat when playing at University Field, boasting an overall record of 129-38-10 since 2002. UTEP has outscored the opponents 13-6 and registered a 4-1 record at home this season.

The Game Plan
The Miners have started their matches defensively strong. They have given up only three goals in first-half action this year. UTEP has put its attack to the test in the second half scoring the majority of its goals after the break (11 of 16).

Palacios & The Career Rankings
Senior GK Alyssa Palacios has compiled some staggering numbers during her career in the Sun City. The result has been her stamping her name throughout the UTEP career record book. The Texas native holds the most career shutout in program history (21), surpassing Sarah Dilling (2011-14).

The Basic Facts
UTEP is in its 23rd season as a program, boasting an all-time record of 252-170-31. The Miners are under the direction of 18th-year head coach Kevin Cross who sports a mark of 210-122-23 in that time frame. He is assisted by two former Miners (Heather Clark and Jessie Pettit).

A Maturing Roster
In 2017 20 of the 27 members of the squad were underclassmen, so it’s only natural that his year’s squad has a bit more experience. In 2018, the Orange and Blue feature a unit where 14 of the 23 individuals are either freshman (seven) or sophomores (seven). There are four juniors and five seniors who are providing leadership for the still relatively young group.