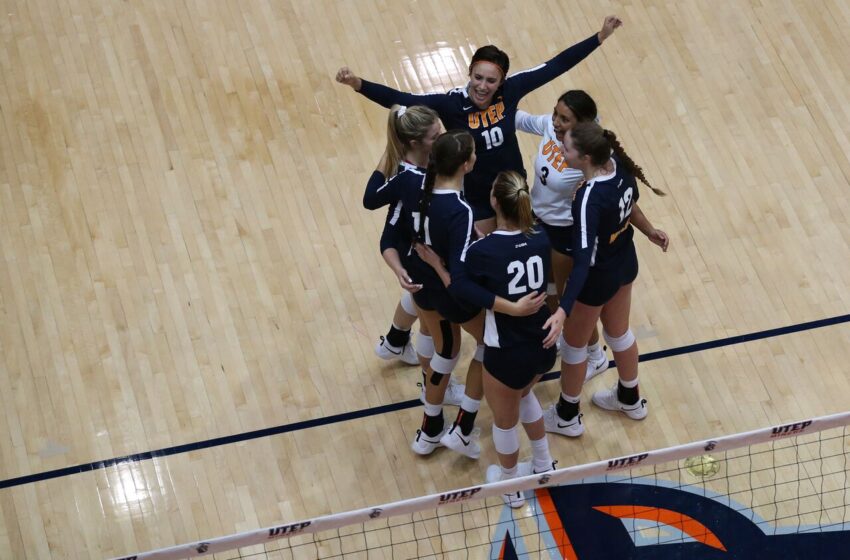 The UTEP volleyball team will compete in two matches in the SDSU/USD Challenge on Friday and Saturday morning, and then it will hit the road to Riverside, Ca, to play California Baptist (8 p.m. MT).

The Miners will travel to San Diego for the first match of the weekend against Oregon State on Friday at 1 p.m. MT. The following day UTEP will take on host-school San Diego State at 10 a.m. MT.

The Orange and Blue will finish off the weekend traveling north up I-15 to Riverside, Ca, for a match against California Baptist on Saturday.

Following the K-State Invitational, Oregon State has racked up a 6-2 record for the season. The Beavers are coming off of a strong offensive performance with a win over North Texas notching 50 kills and a .361 hitting percentage. Maddie Goings has a team-high 121 kills and Grace Massey leads the squad in digs (151).

The Miners first and only meeting with the Beavers took place during the 1997 season at the Wyoming Classic where the Miners fell to Oregon State in four sets. UTEP will look to even up the series this weekend at the SDSU Challenge.

The Aztecs head into the weekend’s challenge on a seven-loss streak (1-8) after a loss to Hawai’i, with their sole win this season against Seattle (8/25). Ashlyn Dunbar boasts a team-best 126 kills this season, while Sam McGrath leads the team in digs (100).

The Aztecs and the Miners have squared off 13 times since 1991, when the two teams were members of the WAC. The last time UTEP was victorious against SDSU was in the 1998 season when the Orange and Blue won a thrilling five-set match.

The California Baptist Lancers have entered Division 1 for the first time in program history with a record of 7-3. Two weeks into their induction to the Western Athletic Conference, Nicole Abreu was named the WAC Defender of the Week. Abreu ranks fifth in the WAC in digs per set (4.19) with a season-high 20 versus American University.

This will be the opening match in the UTEP versus California Baptist series.

Freshman setter Kristen Fritsche has been the model of consistency for the Miners this year. She has amassed a team-leading 316 assists and 112 digs (second on squad). Fritsche has earned six double-doubles this season and has the most assists per set (9.58) by a freshman in Conference USA.

She had a career match against UIC (8/31), when she recorded 46 assists and 27 digs. She was an All-Tournament selection for the Omaha Challenge, where she totaled 108 assists and 48 digs for the weekend.

Sophomore transfer Briana Bustillos has led the way for the Miner defense this season She has tallied the most digs (114) on the team, which has helped her solidify her spot as the premier libero on the squad. Her career high in digs (18) came against UMKC (8/31). Bustillos has seven double-digit dig performances on the year, with the last coming against Montana (9/8).

Miners At The Net

Mallory Yost leads the Miner defensive effort at the net with 24 total blocks ranking 10th in Conference USA. The sophomore also rates seventh in conference in blocks per set (1.00). Yost is not the only Miner protecting the net, Martine Kragholm pitches in a team-high six solo blocks and ranks second on team with 19 total blocks.

Serena Patterson (12), Cheyenne Jones (11) and Kristen Fritsche (10) all contribute double-digit blocks to the Miners 56 total blocks as a team.

Before conference play begins, the team will be traveling to places from the bayou of New Orleans, La., to the beaches of San Diego.

The Miner C-USA schedule will prove to be a battle every night. The Miners open conference play versus Rice (Sept. 21). The Owls are currently third in conference (6-3) and boast a victory over South Carolina. UTSA leads the conference (7-3) and is coming off of a big win over Houston. UTEP will play the Roadrunners Sept. 30 at Memorial Gym.

UTEP head coach Holly Watts’s hard work on the court and in the classroom culture that she has instilled in her team yielded 12 Conference USA Commissioner’s Academic Honor Roll recipients. These students maintained a cumulative GPA of 3.0 or better last season.

Among these honor roll students Macey Austin and Cheyenne Jones were also honored with securing Conference USA Commissioner’s Academic Medals for maintaining a GPA of 3.75 or better. Due to the team’s stellar academic performance in the classroom they were honored as a recipient of the AVCA team academic award.

The Miners add eight new faces to the UTEP family this season. These new Miners come from a variety of different parts of the world from junior transfer Erika Sianez (El Paso native) to Martine Kragholm (Kristiansand, Norway). Freshmen Kenidy Howard, Alex Torres and Serena Patterson are all from the Lone Star State.

El Paso native Briana Bustillos brings in college playing experience as a junior transfer from the New Mexico Military Institute. She helped the Broncos to a third place finish in the 2017 NJCAA Division I Volleyball Championship. Two new setters round out the roster for the Miners. They are Hayley Meshay from Phoenix, Ariz. and Kristen Fritsche from Torrance, Calif.

UTEP recorded all six of its victories in Memorial Gym during the 2017 season. The home crowd atmosphere boosted the Miner team to some of their best performances of the campaign, including an upset win over Rice (9/22) in a five-set thriller where All-Conference USA performer Macey Austin had a career-high 27 kills.

Premier player Macey Austin has already left her mark on the 2018 season. Her 23-kill performance against UIW (Aug. 24) ranks third for kills during a single match in Conference USA. Austin has gotten off on the right foot posting two double-digit kill performances. She also ranks sixth in C-USA in kills (43).

Austin has also stepped up her production on defense this season. She recorded 50 digs her sophomore season and 42 digs her freshman year. Austin has already surpassed those numbers with 76 on the year and 2.30 digs per set. Her skills in all facets of the game helped earn her a spot on the 2018 All-Tournament Team for the Borderland Invitational, when she locked in 43 kills, 4.30 kills per set and 18 digs for the Invitational.

Junior outside hitter Macey Austin found a way to improve in almost every single statistical category during her sophomore campaign. She accumulated career highs in kills (359), total attempts (876), kills per set (3.65) and points (379.0).

Austin’s on the court success garnered her an All-Conference USA second-team selection. She also finished ranked ninth in conference for kills last season.  The league announced near the beginning of the 2018 campaign that Austin was named to the 2018 C-USA Women’s Volleyball Preseason Team.

Macey Austin’s excellence is not limited only to the court. For the second straight year Austin received the Conference USA Commissioner’s Academic Medal for maintaining a GPA of above a 3.75. Austin has proven to be an incredible example of an all-around student-athlete, earning the C-USA Spirit of Service Award where she totaled 21.75 hours of community service.

Kylie Baumgartner is looking to place her name in the UTEP record books by the end of her final season. Baumgartner ranks seventh all-time in total block assists (282). She needs seven block assists to surpass former teammate Lindsey Larson for sixth all-time.

Baumgartner is also poised to pass some major milestones in career total blocks. She only needs two total blocks to rate seventh all-time in program history. She is on pace to become only the second player in Miner history to have 300+ block assists and 400+ total blocks in a career.

Senior Ashley Grzebeniak and junior Niki Cebak represent the great nation of Canada. They combined for 458 digs during the 2017 season and played in 188 sets. They are now joined by another international player, Martine Kragholm of Kristiansand, Norway.

Kragholm will be called upon to contribute quickly, and is a four-time Norwegian Youth National Championship gold-medalist with Kristiansand Sand Volleyball Klubb. The 5,169 miles is a long way from home for the talented middle blocker, but Grzebeniak and Cebak will surely show her the ropes to help acclimate her to life in the Sun City.