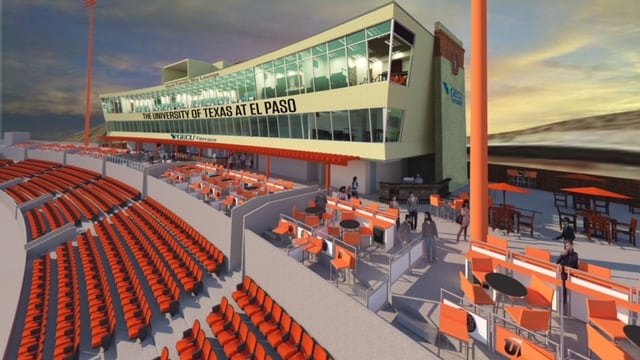 UTEP President Diana Natalicio and Director of Athletics Jim Senter today announced the Hunt Family Foundation has made a commitment to give $2 million to assist in the renovation of the Sun Bowl stadium.

“We are grateful to the Hunt family, longtime supporters of The University of Texas at El Paso, for their generosity as we continue to modernize this iconic campus venue,” President Natalicio said. “The Sun Bowl, which recently celebrated its 50th birthday, has been the site of many memorable moments for all of us at UTEP and in the surrounding region. The Hunt family’s generous gift will help ensure that this facility continues to serve the campus and community as a premier venue for major events for many years to come.”

The gift to UTEP Athletics will launch construction of the Hunt Family Sky Lounge, replacing the existing Captain’s Club on the west side of the stadium.  The new lounge is scheduled to be completed in the fall of 2019.

Josh Hunt, Executive Vice President of Hunt Companies and President of the Hunt Family Foundation said, “For generations, our family has been a supporter of UTEP and that certainly includes its athletic programs.  UTEP is a critical component in the economic development of this region and the Sun Bowl plays a major role in that as well as in our quality of life.  The Sun Bowl Restoration Project will make the stadium a better, more competitive facility and we are pleased to be a part of this initiative.”

“We are so grateful to the Hunt family for their contribution to the Sun Bowl revitalization,” Senter said.

“The excitement for this project continues to grow, and it wouldn’t be possible without the support of tremendous community partners like the Hunt family.”  Senter added that UTEP fans can now purchase loge boxes and club seating in the new Sun Bowl.

The Foundation also supports organizations whose programs impact the state of Texas, and the nation as a whole. Charitable giving is focused on healthcare, education, arts, local heritage, quality-of-life initiatives, and regional economic development.

For more information, visit the Sun Bowl Project Website or contact the Miner Athletic Club via phone (915-747-8759) or e-mail (mac@utep.edu).