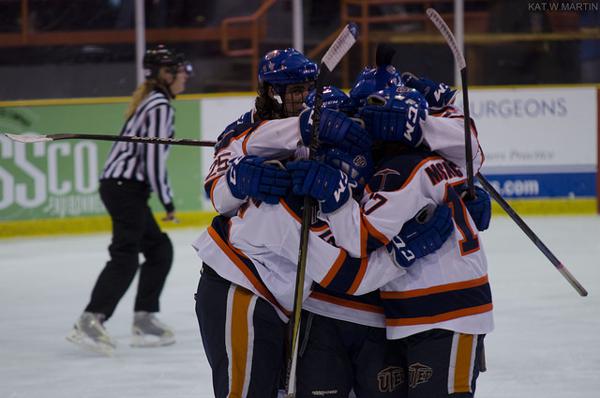 The UTEP Miners Hockey Club headed to Austin Friday to play the second leg of their back to back weekend sets versus the UT Longhorns. After sweeping the Longhorns in El Paso last weekend, the Miners knew that the Longhorns would be looking to defend their home ice.

Both teams came out strong Friday night trading early chances, however it was the Miner’s Brett Bloor who would find the back of the net first as he crossed the top of the circles and ripped a wrist shot top shelf.  The Miners would continue to keep up the pressure as they put up 17 shots in the first period alone.

Lazarski stood tall for the Miners as he turned away all 12 shots in the first.

In the second, both teams continued to battle hard against each other as well as tough ice conditions.  The Miners kept up their pressure and putting 21 shots on net, but they couldn’t find seem to score.  Lazarski made several key stops as he made all 9 saves in the second.

During the third period, the Miners seemed to find their rhythm.  They stepped up their speed and applied more pressure on the Longhorns in the offensive zone.  Half way through the period, Jon Sanca would find the back of the net to put the Miners up 2-0.

The Miners would find themselves shorthanded for the last two minutes, however leading scorer Lukas Znosko would win a race for a loose puck to score a shorthanded empty net goal and make the final score 3-0.  The Miners outshot their opponents 57-26.

Saturday night both teams were back at it.  The Miners were looking to finish off the season sweep and came out strong.  Brett Bloor would once again open up the scoring in the first two minutes of the period.  It would be the only goal scored until Lukas Znosko would score his second shorthanded goal of the weekend with only 6 seconds left in the first period putting the Miners up 2-0.

The Miners would start the second period shorthanded and it was Jeramy Rezaeepour’s turn to score a shorthanded goal. Only 12 seconds into the second frame, Rezaeepour would jump on a loose puck in the Longhorns zone and rip a shot 5 hole to put the Miners up 3-0.

The Miners would continue to keep up the pressure and Josh Baeza would find the back of the net just past the half way point of the second.  Miners outshot the Longhorns 17-5 in the second and were up 4-0.

The final period of the weekend saw the Miners continually getting shots on net.  Parker Levitt would take advantage on a quick 2 on 1 as Baeza feathered over a pass to put the Miners up 5-0.

However, the Longhorns would finally score on the weekend less than a minute later as El Pasoan David Quirarte would find the back of the net.  With less than two minutes left, Znosko would score his second of the game to ice the Longhorns as the Miners would win 6-1.

The Miners will have Thanksgiving weekend off as they prepare to host first place in the TCHC Dallas Baptist December 2nd and 3rd. For ticket information, please visit www.minershockey.com