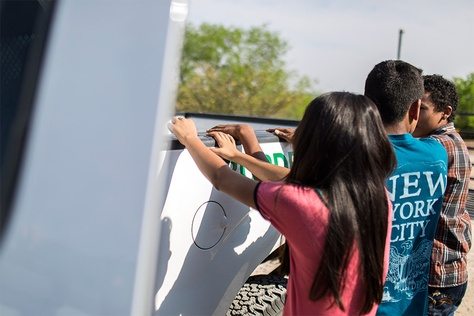 For the second time in three years, the U.S. Border Patrol is apprehending more non-Mexicans than Mexicans along the southwest border, reflecting a renewed surge of Central American migrants fleeing violence and gang warfare in their home countries.

Many of those apprehended are children traveling alone or in so-called “family units,” and come from El Salvador, Guatemala and Honduras, according to newly released statistics from U.S. Customs and Border Enforcement. Nearly two-thirds of the apprehensions occurred within the Rio Grande Valley Border Patrol Sector, spanning much of Texas’s southernmost tip.

Through August of this year, there were a total of 369,411 apprehensions on the U.S.-Mexico border. More than half of those were of non-Mexicans, the statistics show. As of July, the border patrol had apprehended 57,344 people from El Salvador, 58,337 from Guatemala and 41,042 from Honduras compared to 160,193 from Mexico.

Apprehensions of non-Mexicans first outnumbered those from Mexico in 2014, according to an analysis by the Pew Research Center. Faye Hipsman, policy analyst at the Migration Policy Institute in Washington, D.C., says the trend isn’t fading.

A huge surge of undocumented immigrants, including children fleeing the “northern triangle” of El Salvador, Guatemala and Honduras without their parents marked 2014. The influx elicited strong responses from those on both ends of the political spectrum. Both President Obama and then-Gov. Rick Perry deemed the situation a humanitarian crisis. Perry called for the swift deportation of the unaccompanied minors, saying that allowing them to stay would only encourage more to come.

Mexico boosted security along its southern border, hoping to curb illegal immigration through the country, but the efforts have not had a lasting effect, experts say.

Hipsman said Mexico’s increased border enforcement worked for a time in 2015, “but this year, it kind of looks like smugglers have found their way around that enforcement or are just increasingly beating it.”

Her views are reflected in a U.S. Customs and Border Protections report published Sept. 9 which indicates apprehensions overall are higher this year than in 2015, but below the rates of 2014 and 2013.

As of August, the apprehension of unaccompanied children from El Salvador and Guatemala far outpaced apprehensions of

unaccompanied children from Mexico. The same holds true for family units — individuals apprehended with a family member — apprehensions for those from El Salvador, Guatemala and Honduras compared to those from Mexico.

But unlike in 2014, the Border Patrol may be better prepared to process the large volume of Central American immigrants. Border Patrol spokesmen declined comment for this article, but the agency’s report detailed plans for “expanded capacity for refugee processing.”

“There isn’t the surprise element,” Hipsman said. “They aren’t blindsided by these flows anymore. They’ve worked on management and processing them. So you don’t see you know, just that hysteria that we saw in 2014.”