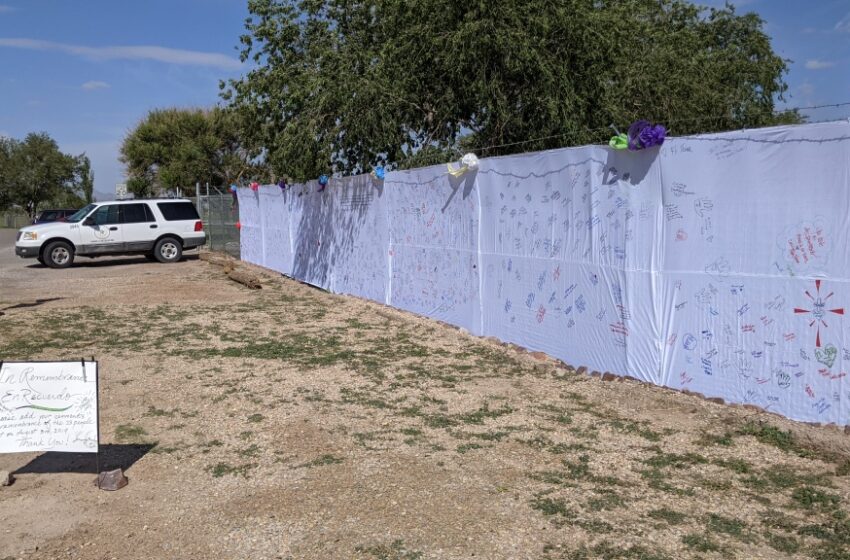 The “In Remembrance/En Recuerdo” fabric mural will be on display for the next several weeks on the fence on the right of the entrance to Ascarate Park.

On August 2, 2021, in El Paso, a fabric wall titled “In Remembrance  / En Recuerdo,” was installed a day before the two-year anniversary of the August 3rd, 2019 Walmart shooting was installed at Ascarate Park.

The fabric wall has messages to the families of the 23 people who were lost on that day.  The messages were added by families throughout El Paso.  People from all walks of life signed it, and now that the wall is in place, all community members are invited to sign as well.

Ramona Juárez, a retired teacher, came up with the idea for the fabric mural. She said wanted to create it “to remind families from the tragedy that in the second year since the incident, we have not forgotten about them or the loved ones that they lost.”

The massive message mural was created in five days.  It took two days for six volunteers, to sew it, hem it and grommet it.  Over 400 feet of muslin fabric was hemmed.

During a three-day period, we took parts of the fabric mural to the El Paso Downtown Farmers and Art Market in front of the El Paso History Museum; to the YISD Central Office; and to Bassett Place (Center) in Central El Paso.

The fabric mural was created in conjunction with the opening of El Paso County Healing Garden, spearheaded by County Judge Ricardo A. Samaniego.

The fabric mural is part of the activities surrounding the El Paso County Healing Garden.

The “In Remembrance  / En Recuerdo” is located across the street from the El Paso County Healing Garden; as you enter Ascarate Park, it is located on the fence on the right hand side.