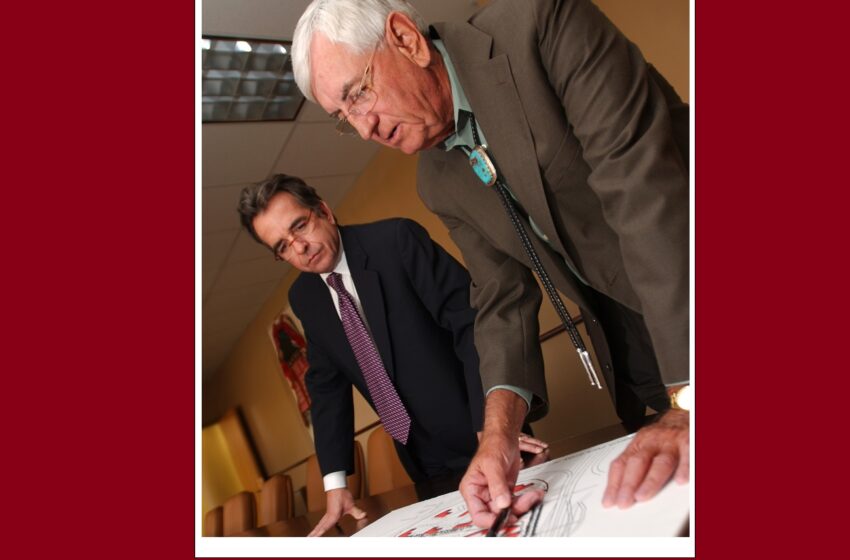 Kevin Boberg, left, and Garrey Carruthers look over an architectural rendering of the new Arrowhead Research Park in 2007, when Carruthers was dean of NMSU’s College of Business and Boberg was the college’s Carruthers Chair in Economic Development. | NMSU photo by Darren Phillips

Kevin Boberg spent more than 30 years serving New Mexico State University and was the idea man behind some of its most impactful economic development and community engagement projects – but you’d never know it to talk to him.

Always keen to defer attention to other collaborators and colleagues, Boberg seldom took credit for the impact he had on the university and its students, though his humble nature belied a lasting legacy of transformative work.

Boberg, who passed away in March after a long illness, joined the faculty of NMSU’s College of Business in 1987, having previously taught at Penn State University and the University of Hawaii. He was soon named associate dean and director of the Bureau of Business Research and Services in the college.

Boberg helped launch Arrowhead Center, the university’s economic development and technology commercialization engine, along with former New Mexico Gov. Garrey Carruthers, who was named dean of NMSU’s College of Business and vice president for economic development in 2003, and Kathryn Hansen, who served as the organization’s first chief operating officer. Boberg led Arrowhead for years as director and CEO.

He was also the first to hold the Garrey E. and Katherine T. Carruthers Chair in Economic Development in the College of Business, which was made possible by a gift of $500,000 from Carruthers and his wife, Katherine, and an additional $1 million in matching funds from the state.

“When we started Arrowhead Center, that lit his fire,” Carruthers recalled. “He really got into the prospects and the possibilities of entrepreneurship, economic development, intellectual property commercialization, and especially the educational programs like Innoventure, which introduces entrepreneurial thinking to grade school students. He just loved seeing the creative ideas that kids came up with, and was proud to see it grow statewide.”

Initially modeled after technology commercialization operations at Rice University and other schools, Arrowhead Center has grown into a hub of programs and resources that benefit not only the university’s intellectual property commercialization efforts, but the broader economic development landscape of the Borderplex region, as well as education and workforce development in southern New Mexico.

One of the success stories that emerged out of Arrowhead Center’s many collaborations was the Early College High School – now called Arrowhead Park Early College High School – founded in 2010 on the NMSU campus. Developed through a community partnership between the public schools, business and economic development entities, and NMSU, the school aims to improve graduation rates and prepare students to enter the workforce ready to start a career in a STEM field or continue on a path to a bachelor’s degree.

“Kevin was the one who negotiated on behalf of the university to put the Early College High School on our campus,” Carruthers said.

Boberg assumed the role of NMSU’s vice president for economic development in 2013, when Carruthers was named president of the university. At that time, Kathryn Hansen took over as Arrowhead Center’s director and CEO, continuing to build on Boberg’s work.

“Kevin was incredibly creative in his approach to economic development,” Hansen said. “He was always looking beyond the horizon and bringing ideas to the table that really pushed boundaries.”

Another project that Carruthers asked Boberg and Senior Vice President Ben Woods to spearhead was the Burrell College of Osteopathic Medicine, a private medical school now located on NMSU’s campus. Boberg and Woods led a team effort to secure the partnership deal that brought the college to southern New Mexico, helping to address gaps in access to medical care in the state’s rural and underserved areas.

While he avoided personal credit for the work he did to benefit the community, he saw to it that the university received recognition for its work in community engagement, innovation and creating economic opportunities for New Mexico. In 2015, he led the successful efforts to earn the university both a Community Engagement Classification from the Carnegie Foundation for the Advancement of Teaching and an Innovation and Economic Prosperity University designation from the Association of Public and Land-grant Universities. Both prestigious designations are acknowledgments of the work that NMSU faculty, staff and programs do to benefit students, communities and the entire region, and Boberg was extremely proud to see the work of his colleagues recognized in this way.

Of all his roles at NMSU, though, Boberg found the greatest joy in his work with students, as a professor and a mentor. As a member of the Pete V. Domenici Institute Advisory Council at NMSU, Boberg was a mentor for the Domenici Public Policy Conference Student Panelist program and helped create the Domenici Scholars program. He guided students as they researched and prepared questions for prominent national public policy figures, and he helped create additional opportunities for them as they launched their careers.

“Dr. Boberg had a tremendous impact on my ability to analyze and impact health policy,” said Dr. Harris Ahmed, who participated as a Domenici Scholar in 2017 while a student at Burrell College. “He was always empowering and an advocate for me. He put me in contact with the former U.S. surgeon general and helped me network with leading public policy departments.”

Ahmed is now a resident physician in ophthalmology at Loma Linda University and a national committee member on legislation and advocacy for the American Medical Association.

“Kevin’s love of students was such an important part of who he was,” Hansen said. “He was always willing to go that extra step for them, and it made a real difference for so many students.”

Boberg was also generous in supporting students financially, creating the Fagin Fund Current Use Scholarship in 2015 to support undergraduate students from New Mexico who demonstrate an active and ongoing investment of time in community engagement activities and leadership roles.

Boberg is survived by his wife, Teresa Provencio Boberg, and his children, Emily, Owen and James.

At its regular meeting May 14, the NMSU Board of Regents will honor Boberg’s legacy at the university with a proclamation. For more information about the meeting, which begins at 9 a.m. and will be webcast, click here.