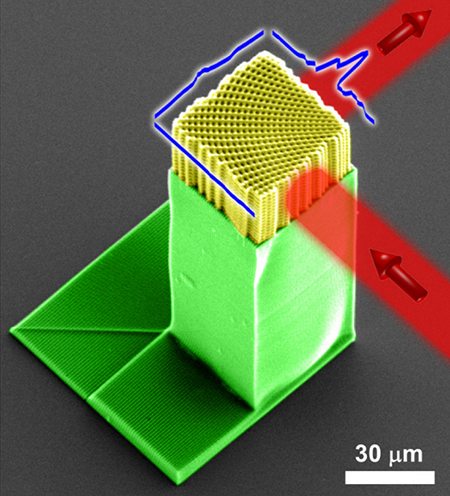 A breakthrough innovation by members of UTEP’s Department of Electrical and Computer Engineering that may help the speed of light transmit computer data made Opli Magazine’s Best in 2015 for Innovations in Photonics. Opli is the largest independent news source dedicated to covering photonics, physics, machine vision, medical engineering, solar energy and technology.

Nothing is faster than the speed of light. At 186,000 miles per second, scientists have fixated on the power source for years, hoping to harness its speed for faster data transmission in computers.

Electrical engineer Raymond Rumpf, Ph.D, is one of those scientists. He envisions a world where computers will one day send information on light – not electricity.

“This could mean exponentially faster computers and internet connections,” said Rumpf, an associate professor of electrical and computer

engineering at The University of Texas at El Paso.

Current computer systems are considered slow because of the metallic wire connections within their circuit boards. Using electricity, copper wires transfer data some 1,000 times slower than light potentially could.

Swapping out electric data transmission for light, or optical power, would lead to a much more efficient system, Rumpf said. The problem is how to control light beams so that they can make the same sharp turns that wires make on circuit boards.

Guiding light beams to make sharp turns has been notoriously difficult. Conventional light beam waveguides, structures that light can travel through for direction – like optical fibers or hollow metal pipes – must curve gradually to make light beams turn. If the turn is too quick, the light beam will lose its energy.

“The name of the game is being able to control these light waves,” said UTEP alumnus Javier Pazos, Ph.D., who conducted research in Rumpf’s lab. “And we were able to do just that, with unprecedented success.”

In close collaboration with the University of Central Florida, Rumpf’s EM Lab recently devised and demonstrated a complex geometrical plastic lattice that a light beam can travel through instead of conventional waveguides. Described in the journal Optics Express, the technology offers a novel way to bend and control light at whatever degree the handlers choose.

Pazos emphasized that besides being able to bend light, the material they used to achieve control over it is ordinary and inexpensive, particularly when compared to other technologies that are attempting to do the same thing.

“The fact that we can do this with a simple plastic – an epoxy – is a pretty big deal,” he said. “Normally, you need an exotic, unheard of material to even attempt this.”

The study occurred in collaboration with the University of Central Florida; UTEP engineers served as the theorists and designers behind the invention, while UCF researchers built the final product with a nanoscale 3-D printer and then measured its performance in their lab.

Rumpf, who spearheaded the effort, envisions the groundbreaking technology will first appear in high-performance super computers before it can be found in people’s everyday laptops.

This year Rumpf was invited to present a lecture at The Royal Society in Buckinghamshire, England, because of his involvement with cutting-edge research. The society, which is is known for identifying and supporting the work of outstanding scientists, brought together a small group of world-renowned, electromagnetics experts, including Rumpf, to share their ideas and consider the up-and-coming potential for radically new devices.

“My talk was very well received at the society,” Rumpf said. “I think what got everyone’s attention was how we can build this light-bending lattice not just for flat surfaces, but for curved ones, too.”

Rumpf explained that the lab is able to tailor the technology for curved surfaces, like the nose of an airplane, the head of a missile or even contact lenses.

This sort of exploration, which takes controlling light to a whole new level, may have been what caught the Royal Society’s attention, and even more recently, EE Web.

The online Electrical Engineering community interviewed the UTEP faculty member in February 2015 and featured him on their site as engineer of the week.

Pazos, who graduated from UTEP in December 2014 with a Ph.D. in electrical and computer engineering, said he is grateful he got to work alongside Rumpf during his time at the University.

“Dr. Rumpf is a visionary and a great inspiration,” Pazos said. “He takes on high-risk, high-reward projects, and like any good engineer, he looks at what’s out there and can envision a way to make it better.”

The EM Lab’s research focus has inspired Pazos to seek a career with Intel; the company is currently making strides toward this new high-tech future that involves light.