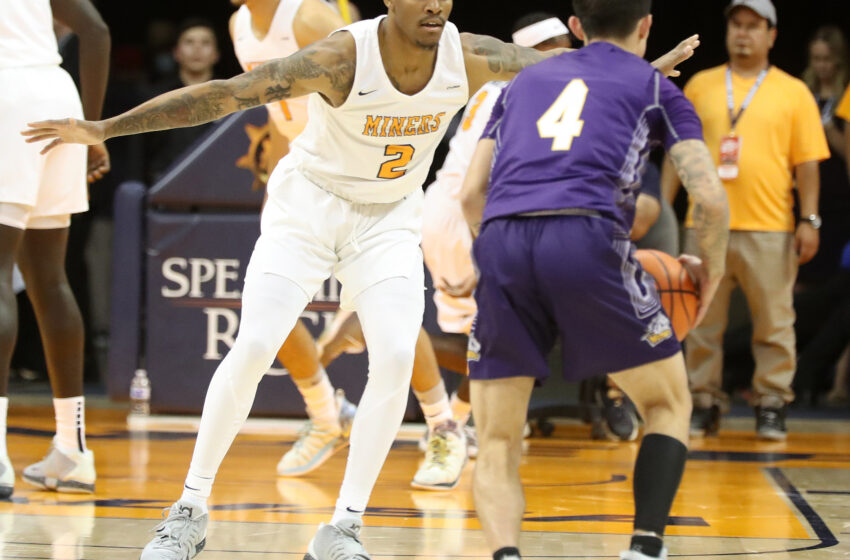 Anyone who watches UTEP men’s basketball guard Christian Agnew play college basketball for more than 30 seconds will be immediately struck at just how hard he gets after it at both ends of the court.

When the camera locks in on him, the intensity and fire in his eyes immediately jumps off the screen. The passion and drive are something that cannot be taught but to Agnew, it’s something he has always had

“It’s always been there, that’s just a part of being from Detroit,” Agnew said. “It’s a hard-nosed, blue collar city, and that’s how I’ve been playing ever since I started playing basketball, football and baseball.”

Hailing from the Motor City matters to Agnew.

“It actually means a lot (to represent Detroit),” Agnew said. “I know I’ve got family and friends that play basketball, and I love to represent them as well as me.”

Every player dreams of playing collegiately when growing up, but initially Agnew believed that it was going to be a different sport. Once he settled on basketball, though, he knew he would have an opportunity at the college level.

“When I was I growing up I actually thought that I was going to be playing football or baseball,” Agnew said. “When I got into basketball I figured out (how good) I was, so I knew some type of college basketball, either DI, DII or DIII would be an option.”

While the idea of being a college basketball player is no longer a dream but a reality, he still understands what it took to get there.

“It took a lot a lot of hard work to get to be a Division I college basketball player,” Agnew said “When I made it as a freshman (at North Alabama) it meant a lot to me.”

UTEP has faced a lot of adversity this year with illnesses and injuries, but Agnew has done whatever asked of him to help the team.

“He just wants to win so he does anything that the team asks him to do,” UTEP head coach Joe Golding said. “He’s been put in starting roles, he’s come off the bench. Through all the adversity we’ve had, he hasn’t been able to identify the exact role but he rolls with the punches and when he gets an opportunity he always plays well.”

And as far as the energy, Golding loves that as well.

“He’s got incredible energy and plays the game really, really hard,” Golding said. “He’s obviously one of our better defenders and I’ve enjoyed him. He had a lot of adversity when I got here in the spring, but he’s been great in the classroom and he’s been dependable on the floor. So I’m very appreciative of him.”

Agnew gets after it defense and has a lot of talent at the offensive end as well, evidenced by approaching 1,000 career points between his time at North Alabama and UTEP. But what he takes most pride in is being a good teammate.

“Just being available for my teammates is what I pride myself most on,” Agnew said. “So whenever they need me, whatever the assignment is, that’s the best (way) that I can describe it.”

Agnew is known for making plays all over the court, even guarding so closely and intensely to get a five-second call with the ball already in play in a game earlier this year. But when it comes to receiving praise for that or anything else, he’s extremely humble and focused on the next play.

“It’s just another turnover that I created for my teammates,” Agnew said. “The feeling (in the moment) is just let’s get onto the next possession.”

He aspires to play at the next level, but he’s at peace with whatever happens. He also has back-up plans, including working to become a vet.

“Wherever God leads me honestly (is where) I want to end up,” Agnew said. “If basketball works, basketball works. I’m pretty sure I’m guided in the right path. I’ve been learning about animals since I was in eighth or ninth grade so wherever that leads me I know that my knowledge will bring a lot of access and success. I’m pretty much all around (in animal knowledge). I know a lot about exotic animals and regular animals too.”

Agnew is more affectionately known as “Sauce” or “Saucey,” but as for why he goes by that, he’s a bit coy.

“I love when people put Saucey in their terminology, not my terminology,” Agnew said. “They just get an idea of me. Whatever people want it to mean, it means.”

For fans unfamiliar, the next chance to check Agnew and the rest of the Miners out comes at home this week with match-ups against Florida Atlantic (7 p.m. MT Thursday) and FIU (7 p.m. MT Saturday).