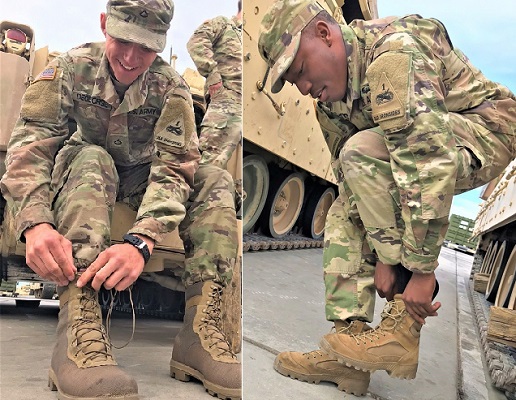 Every Soldier understands the importance of their feet to complete Army missions and rely on their boots to remain sturdy, comfortable and flexible, which is why the U.S. Army is completing a test to eventually issue new hot weather combat boots.

Perkins went on to say that a Congressional survey showed “over half of the Soldiers who participated noted they purchased commercial boots once the initial entry phase was complete. That is how we knew that there was some needed improvements. This, then, became an opportunity for us to now take advantage of the current technology and manufacturing footwear industry processes.”

“We started off in a study that compiled the ten most liked boots, which then led us to the four prototypes that we have now,” said Jay McNamara, another footwear research engineer at NSRDEC. “They are meant to be more lightweight, flexible and comfortable. It’s meant to really improve a Soldier’s quality of life.”

“I understand why the Army chose the Iron Brigade to conduct this test,” said Command Sgt. Maj. Michael C. Williams, senior enlisted advisor to 2 ABCT. “Our Soldier’s mission is extremely diverse and will provide a wide array of feedback for the Army’s research and development of new combat boots. I’m glad we can help the Army figure this out while we train on combined arms maneuver. The tough, realistic training we are conducting in very rugged terrain and austere conditions will certainly give the Army plenty of data to facilitate the best decision being made. The deserts and mountains of Fort Bliss will test this equipment to the fullest and will ensure it is capable of meeting the needs of today’s Soldiers.”

With the training posture of 2 ABCT, NSRDEC hopes “to come back after four months to collect the data, which will then go on to make real improvements to the hot weather combat boots for all future Soldiers,” says McNamara.

This team has a personal tie with this mission to create a new way to maneuver- which is one of comfort.

“One of the best feelings I have is being able to see a Soldier put their foot in a boot and look at me wanting to hug me,” explained Perkins. “Just in the initial issuing of the boots, the Soldiers are giving great feedback; but, nothing’s official yet until we complete the entire study.”

Pfc. Austin Tryon, an infantryman with 1st Battalion, 6th Infantry Regiment, says, “I am definitely excited about the new boots that we may be getting. The old ones, even though they were the right size felt like they were too long. Well, the inside fit too tight, but the outsides were very big.”

Tryon goes on to say, “I had to purchase my own boots, but that was starting to get really expensive. This is definitely a step up as far as Army issued boots go.”

“A study like this goes to show that Soldier’s voices are being listened to and steps are being made to mitigate their grievances,” said Capt. Lucas Makens, an assistance planner with 2 ABCT. “As we move forward, we hope that Soldiers continue to speak out their opinion in these surveys to improve the future of the Army.”