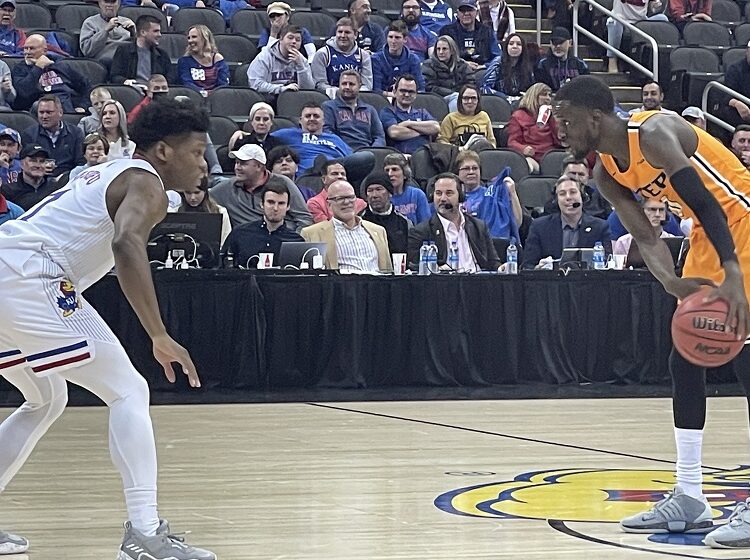 KANSAS CITY – Souley Boum (18 points) and Keonte Kennedy (11 points) both hit double figures in scoring and UTEP (4-4) held No. 8/7 Kansas (7-1) to seven points below its scoring average in a 78-52 setback inside T-Mobile Center Tuesday evening.

The Miners played the majority of the game without starting PG Jamal Bieniemy, who collided with Kevin Kalu as both hustled going for a loose ball midway through the first half.

KU carried a 42-21 advantage into the locker room but only had a 36-31 differential in the second stanza despite playing stars Ochai Agbari (23 points) and Christian Braun (20 points) all the way to the last media timeout in the game.

“I thought our players competed and did some good things,” UTEP associate head coach Jeremy Cox said. “You don’t necessarily see it when you look at the scoreboard, but this is a basketball team that was averaging 85 points coming into it.

“We turned them over 16 times, which is unheard of with a Coach Self Kansas team,” Cox said. “We did some good things, the biggest being in the second half-without Bieniemy who was hurt- we kept playing. We weren’t a deer in the headlights. We were just UTEP playing against Kansas.”

UTEP had 14 turnovers compared to the 16 by the Jayhawks. The Miners also limited KU to 6-20 on 3-point tosses for a readout of 30.0 percent, more than six percentage points below their average. KU made up for that by shooting 53.6 percent overall, including 59.3 percent in the first half

KU opened up the contest on an 10-0 run, aided by four Miner turnovers. UTEP got on the board with a corner triple from Boum. After four straight points from KU, Kennedy sliced through the defense for an athletic lay-up to get the game back within single digits at 14-5 with 12:25 left in the period.

The Jayhawks responded in a big way, using a 26-8 sequence over the next week on the lead to opening up a 27-point cushion (40-13) with 4:32 to play in the period. The Orange and Blue took the hit in stride, keeping KU without a field goal down the stretch to close the half on an 8-2 push to make it 42-21 heading into halftime.

Four different Miners scored during the sequence, which was fueled by an uptick in defensive intensity. UTEP harassed the Jayhawks into five of their 10 turnovers in the opening frame during the time period.

The Orange and Blue kept up the defensive intensity to start the second half, forcing KU to misfire on its first four shots to start the period. UTEP couldn’t get any closer than 18 the rest of the way but refused to let Kansas run them out of the building

UTEP plays its second straight road game when it takes on New Mexico in the Pit at 1 p.m. MT on Sunday (Dec. 12). Jon Teicher (41st year) will be on the call, which can be followed on “The Home Of UTEP Basketball” 600 ESPN El Paso, the UTEP Miners App.