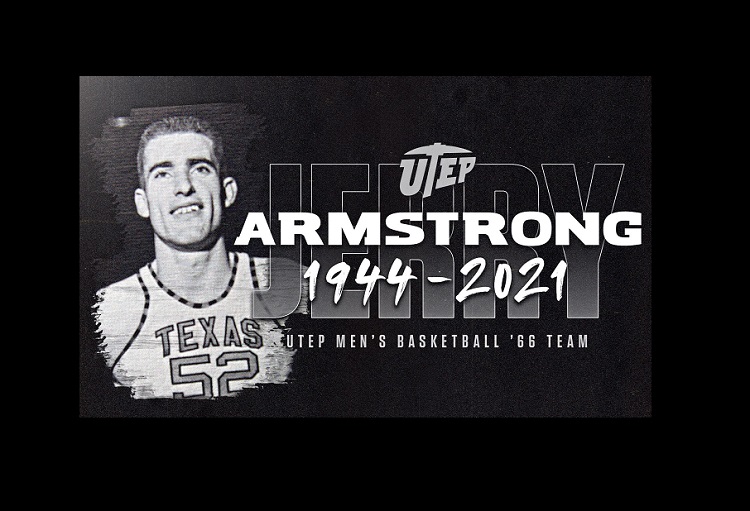 The 6-4 forward from Eagleville, Mo., lettered three seasons (1963-66). During his junior campaign, Armstrong shot 42.6 percent from the field and 72 percent from the foul line over 22 contests | Photo courtesy UTEP

Armstrong saw action in 24 games as a senior during the 1965-66 championship season. He scored 45 points and grabbed 33 rebounds. Armstrong led the Miners at the free throw line, shooting 87.5 percent (21-24).

Armstrong played in 13 games during his sophomore season. In 59 career games, Armstrong shot 75 percent from the charity stripe.

At the 1966 NCAA Tournament, Armstrong was penciled into the starting lineup against Kansas, and grabbed a rebound during the Miners’ 81-80 double-overtime victory on March 12 in Lubbock. Armstrong tallied three boards and was credited for his defense during TWC’s 85-78 victory over Utah at the Final Four in College Park, Md., on March 18.

Armstrong held Jerry Chambers to only a few points in the second half after Chambers scored 24 before halftime. Chambers was later named the tournament’s Most Outstanding Player and was the no. 7 pick by the Los Angeles Lakers in the 1966 NBA Draft.

In 2007, the TWC national champs were inducted into the Naismith Memorial Basketball Hall of Fame.

In 2016, Armstrong was also inducted into the Missouri Sports Hall of Fame. Following his collegiate career, Armstrong became a basketball coach for 21 years and compiled a 329-195 record at four Missouri high schools – Trenton, King City, Richmond and Mansfield – before retiring in 1996.

His King City squad reached the state semifinals in 1987 and finished third.