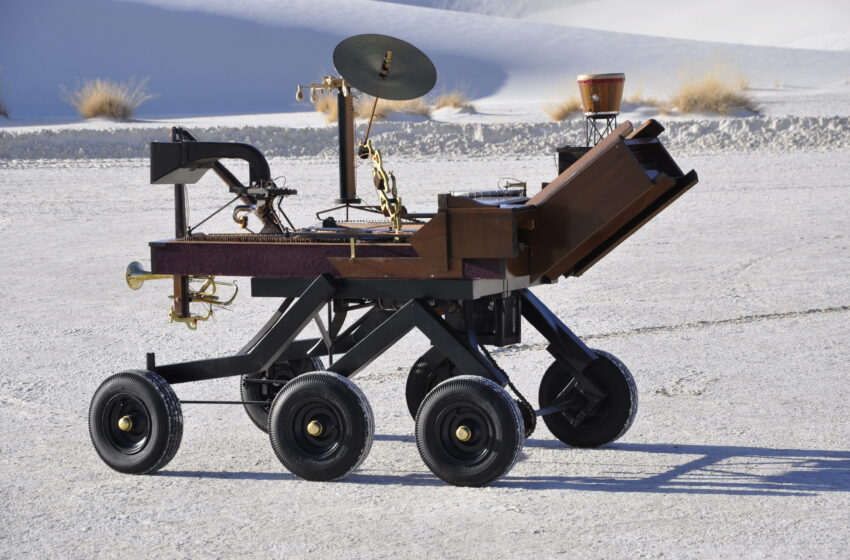 The four-wheeled, remote-controlled EAR1 will help roll out the fourth season of the El Paso Community Foundation Jewel Box Series at the Philanthropy Theatre.

Impact | Programs of Excellence presents Morrow and EAR1 at 2:30 p.m. Sunday, October 8 in the Philanthropy Theatre, located on the second floor of the Plaza Theatre Performing Arts Centre Annex (above the box office).

The October 8 program will feature a short, introductory talk by Morrow, a musical performance on the rover, and a short film about the EAR1’s travels in the region.

Las Cruces resident Morrow, who teaches at El Paso Community College, describes his work as being “at the intersection between art, science, and music.”  Morrow has art degrees from New Mexico State University and the Massachusetts College of Art.

The Jewel Box Series is produced in partnership with El Paso Live, and is supported by the City of El Paso’s Museums and Cultural Affairs Department.

Telling El Paso — Our Veterans. Their Stories. — Six local military veterans from different conflicts tell their stories, in their own words, in this revival of a production staged in 2016 by Eden Enterprises and KCOS TV as part of the national Telling Project.

Amor — The El Paso Society for Musicians of the Future offers another of its thematic programs, just in time for Valentine’s Day. Mezzo-soprano Cherry Duke, guitarist George Salas and violinist Sandra Rivera perform songs and music about love and romance.

Nouveau Chamber — Saxophonist Daniel Rivera and a seven-piece string ensemble will perform his original chamber works. The pieces are influenced by classical, Latin and film music, and explore travel and human history.