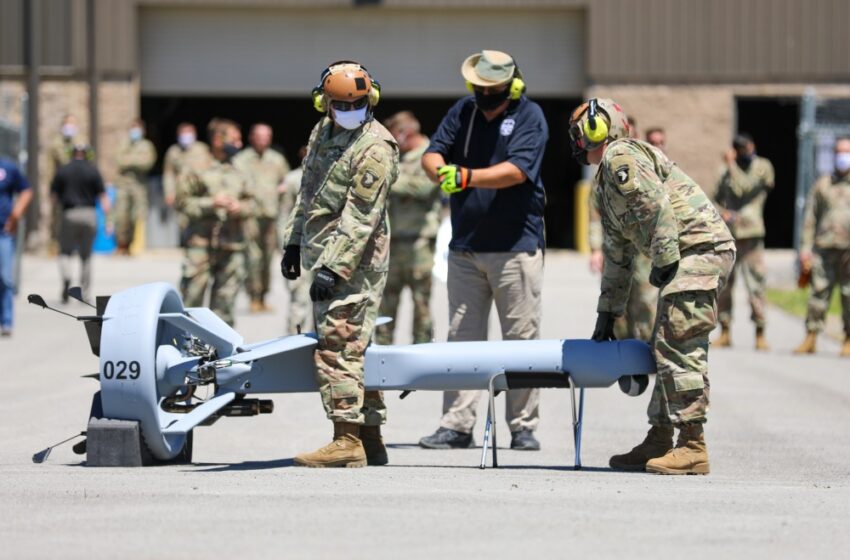 As the Army looks toward replacing the RQ-7 Shadow for brigade combat teams, the U.S. Army Joint Modernization Command is gathering Soldier feedback to make sure their warfighting needs are met.

The FTUAS Demonstration is being driven by 3 key operational needs statements from I Corps, the 25th Infantry Division and the 82nd Airborne Division. What those statements asked for is a UAS that is rapidly deployable, runway independent, and can launch and land vertically, said Orlando Olivas, Capability Integration Analyst in JMC’s Field Experiments Division.

“Really, what they are getting after is the Shadow at the BCTs is not tactical,” Olivas said. “Where we’re moving from the BCT’s perspective, in multi-domain operations, you have to be expeditionary and have more reactionary capabilities. And the Shadow is not; it requires a large footprint for a runway. The Shadow requires a launcher and a lot of equipment. It’s not an on-the-move capability.”

Sgt. 1st Class Ryan Butcher, system analyst in JMC’s Field Experiments Division, has been in the field assessing the Arcturus UAV JUMP 20 with the 1st Armored Brigade Combat Team, 1st Infantry Division at Fort Riley, Kansas. Butcher said Soldiers have been excited about its capabilities, especially the ability to take off and land from a single point, negating the need for a large runway.

“They love the ease of maintenance, and they love the rapid setup of this system,” Butcher said. “They are looking forward to the different payload capabilities, and I want to hear their feedback on what payload systems they think need to be installed for future BCT requirements.”

Soldier feedback early in the development of the requirement ensures the Army doesn’t waste money on equipment or capabilities that those in the field can’t use. The feedback informs multimillion-dollar acquisition decisions, Olivas said.

“That’s the uniqueness that JMC provides — early Soldier feedback in the process to facilitate rapid acquisition,” Olivas said. “We are the initial eyes to get that Soldier feedback up front. At the end of day, the Soldiers are going to fight these systems, not the vendors and engineers who design these UASs. JMC gets Soldier feedback all the way down to the lowest enlisted guys who are out there fighting the fight. Every Soldier counts.”

Part of that process is talking to Soldiers about what capabilities are most important and the tradeoffs they would be willing to make, Olivas said. For instance, once the BCT has a UAS that is more mobile, do you still need the endurance and range the Shadow provided? A mobile UAS can change the tactics a BCT uses, and thus the capabilities needed.

Coordinating the assessment of four UAS between five BCTs at different locations was always going to be difficult, but the COVID-19 pandemic certainly added to the challenge. With the COVID-19 situation and restrictions being different at each location, it has taken constant coordination with all the participating agencies to keep the assessment moving forward, Butcher said.

“We’ve been very fortunate to have the 1st Infantry Division make this mission essential,” Butcher said. “We had to adjust fire on our initial timeline, and we’ve remained fluid and adjusted to the units’ schedules to the best of our abilities.”

Some of the initial assessment points had to be done virtually, but as COVID-mitigation efforts mature, the assessments are returning to the field with restrictions, Olivas said. In some coming assessments at combat training centers (CTCs), the commanders want to keep the exercises in a bubble, which means the JMC assessment team will remain in the field for the entire assessment.

JMC has turned in an in-stride report on the 1st Armored Brigade Combat Team, 1st Infantry Division’s early experience with the Arcturus UAV JUMP 20. In the months ahead, that assessment will continue, culminating in an exercise at the National Training Center.

“CTCs are key to our assessments, so I’m very interested to see how the units react as they get to utilize these systems in CTC rotation,” Butcher said. “The way we designed this demonstration was crawl, walk, run. The CTC will validate the feedback Soldiers are giving. The systems will be tested more rigorously. I’m looking forward to seeing how their opinions might change and what additional feedback they provide.”

Though the 1st Armored Brigade Combat Team, 1st Infantry Division was the first unit to help assess the future UAS, four other units are assigned to assess the Martin V-Bat, Textron Aerosonde HQ, L3 Harris FVR-90, and a second Arcturus UAV JUMP 20. In addition to brigade FTXs, all the units will assess their UAS at either the National Training Center or the Joint Readiness Training Center. After all the assessments are complete, JMC will produce a final report to inform the FTUAS BCT Capability Development Document.